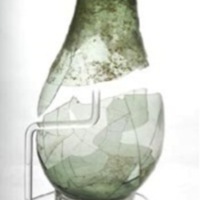 In medieval London the urinal was used as a tool for diagnosing illnesses. The object was usually made of glass, cylindrical in shape, and had to be opaque in order to inspect the color of the urine. Medical professionals attempted to diagnose illnesses by examining the color of urine, specifically the uppermost layer of urine, called the circulus. Uroscopy was not a new method of diagnosing ailments, and had probably originated in ancient Sumeria and Babylon around 4000 B.C.E. Uroscopy gained a considerable following among medical practitioners in the Middle Ages. Although this particular urinal dates to the late medieval period, similar urinals have been discovered in the United Kingdom dating back to the thirteenth century.

The urinal was a symbol of the medical profession between the thirteenth and seventeenth centuries, and was often used in paintings to depict ailments or doctors. Uroscopy and urinalysis were written about extensively and there were a multitude of different methods and diagnoses written about in the time period. Much of the medieval understanding of uroscopy stemmed from earlier Middle Eastern, Greek, and Roman understandings of the science. For instance, Theophilus Protospatharius wrote one of the most famous publications on uroscopy during the seventh century in Byzantium, and his one of the only surviving manuscripts dedicated exclusively to the topic. Other notable works include On Urine by Joannes Actuarius, written during the fourteenth century, and the thirteenth-century Poem on the Judgement of Urines by Gilles de Corbeil.

Although urinalysis could be helpful, it was not an exact science, and there was widespread disagreement over what each particular shade and consistency of the urine meant in terms of diagnosis. Urine was of significant importance to the diagnosis of illnesses because of the way medieval medical practitioners thought about the body. According to medieval thought, which followed ancient Greek medical practices, urine was considered to be one of the four humours (urine, blood, bile, and phlegm) that balanced the well being of the body. The study of humours was not precise or very scientific and was therefore not very effective. Quite often the urinal was used as a satirical symbol, which poked fun at the medical profession and its intellectual deficiencies at the time.

This urinal measures about 225 mm in height and 130 mm in diameter. Although a clear urinal was optimal, this urinal has a greenish tint because of the way in which the glass was manufactured. There were several types of glass available in the late Middle Ages for the manufacturing of urinals, although this urinal is most likely made out of “forest glass,” easily identified by its greenish tint. Forest glass was mainly manufactured in Northwest and Central Europe and consists of sand and wood ash. The raw materials being used were often high in iron and manganese, which subsequently gave the glass its distinctive bluish-green tint.

Uroscopy was mainly available only to the upper classes of medieval society, as is evident in many medieval paintings. If a urinal is present in any medieval artwork, a medical practitioner and a bedridden patient are usually the focus of the piece. We may infer the high social status of the patient by his or her attire, and that uroscopy was an expensive procedure not available to the poor at the time. Regardless of its imprecision, uroscopy and urinals in general have existed for a remarkably long period of time and their use as a symbol of medicine can be found throughout medieval art and culture. 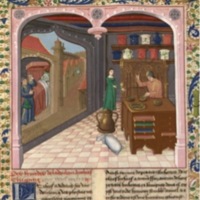 An illumination from 1240 found in Batholomeus Anglicus's book On the Properties of Things. It depicts, among other things, a medical practitioner examining a urinal for his sick patient.