A crucible is a container in which metal or other substances can be melted or exposed to high temperatures. Because of its function, crucibles are necessarily made of materials which can withstand the high temperatures of the blacksmith’s furnace without sustaining damage. In the medieval period, they were either stoneware or fashioned from ceramic.

Typically, this tool was used in non-ferrous metalworking. Most popularly, it was utilized to smelt copper alloys, especially leaded bronze, which was referred to as “latten” in medieval texts. The molten alloy could then be poured into a mold or ingot, often a furrow made in the stone floor used to make rods which could then be hammered to produce wire or sheets. These objects could then be fashioned into other tools, such as cauldrons or skillets. Often crucibles were used only once, which means that they are one of the most commonly found artifact in areas of non-ferrous metalworking. The mass production of crucibles also indicates that they had little value, either economic or sentimental.

In addition to providing archaeologists and historians with evidence for the locations in which metalworking took place, the presence of crucibles is helpful in determining the methods through which certain objects were created, and the materials out of which they were made. Often traces of the metals found in crucibles or in crucible fragments confirm the information about metals and metalworking mentioned in medieval documentation of smelting. For example, in the twelfth century, Theophilus, a pseudonym likely belonging to a Benedictine monk who compiled and authored various texts describing the many medieval arts, describes in his book On Divers Arts a method for making brass, an alloy of copper and zinc. The method involved combining calamine ore and copper in a crucible, and covering the mixture with charcoal. The zinc is released from the calamine ore in gaseous form and becomes alloyed to the copper. In a study of metalworking debris from buildings in the Cripplegate neighborhood of London, the presence of these elements in crucibles was confirmed through chemical analysis.

Crucibles in medieval London differed in form, size, thickness, and the material out of which they were made. In general, they were made with flat bases so that they could be placed on the ledges of the furnace. The rim had a single pouring spout and a diameter up to twice that of the base. Based on the findings at Cripplegate, larger crucibles typically had thicker walls than their smaller counterparts. The smaller crucibles were most likely used to melt down precious metals such as gold or silver, while the larger ones were used to smelt latten for objects with more practical uses.

This particular crucible is made of earthenware ceramic, a type of pottery that is usually twice fired, once to the point of vitrification (making the material slightly porous) and a second time with a glaze to overcome the porosity. It displays the wide rim and single pouring lip common of the crucibles of the time period. It measures 80 mm in height and 98 mm in diameter. The size of this crucible classifies it as medium-sized, indicating that it was most likely used to smelt the copper alloys of which many household items were made. This tool was produced sometime between the eleventh century and the twelfth centuries. Because these objects were disposable and mass-produced, there is little information available about specific crucibles and their functions; rather, they are studied as a whole to determine certain trends and patterns that may have existed within medieval metalworking. 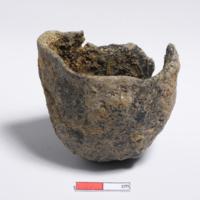 Crucible found in a 2009 excavation of a medieval metal workshop on Jewry Street in Winchester. Chemical analysis was not performed on the surface of the crucible, so it is unclear whether the tool was used for copper-alloy or silver. 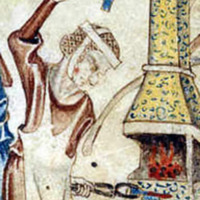 While this image does not depict a crucible in use, it does depict a blacksmith's wife forging a nail-- the type of craftsperson who would use a crucible. Shown is the heating and hammering of the already-smelted metal, as depicted in the Holkham Bible.