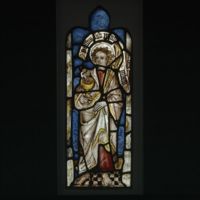 The industry of glassmaking flourished due to the rise of Gothic architecture. Glassmaking is a highly-skilled art form; medieval glassmakers studied for years to become experts. Seventy-eight known glassmaking sites existed in medieval England, most of them located north of London. (However, “crystal” or clear glass was made strictly in London at the end of the medieval period due to the immigration of Italian techniques.)  The practice of creating stained glass windows advanced throughout the Middle Ages.  In On Diverse Arts (written in the early twelfth century)the German monk Theophilus – who was also a metalworker – affectionately and meticulously described the techniques used for fashioning stained glass.  A sand and a wood ash mix, called potash, were the fundamental components for glass. Potash would be melted and then cooled.  Certain powders were added to the sand and potash while the mixture was molten, a process that effectively colored the glass.  To create a picture within the stained glass, different colored glasses would be laid out over a board with a design already drawn out, then the pieces were connected together by a process called leading.  To add finer detail, the metalworker or artist would carefully draw on the colored glass with black paint to create shadows and delicate lines.

Whole pieces of stained glass from the Middle Ages have been difficult to find, as much of them were destroyed during the Reformation to “cleanse” England of its Roman Catholic heritage.  Luckily, a few pieces (usually windows that were installed high up, such as Rose Windows) survived.  The dimensions of this piece of stained glass are 20 inches in height and 7.25 inches in width.  This piece is located at the Victorian & Albert museum, room 84, case BAY2.  It was made in England (location of make, where it was installed, and its artist are unknown) during the early fifteenth century.  Depicting Saint John the Evangelist, this stained glass window is classified as a panel, as it is apart of a larger piece of stained glass artwork.  This panel is a tracery light, a wide strip of stained glass located in the higher openings of a larger window.  The colors of the stained glass window contain various tones of blue, yellow, gold, and red.  Saint John the Evangelist is one of the Twelve Apostles of Jesus, one of the men responsible for spreading the Christian faith throughout the world after the Ascension of Jesus Christ.  The words PASSUS SUB PONTIO PILATO are inscribed above the saint’s head.  These Latin words translate to “he suffered under Pontius Pilate,” a line from the Apostles’ Creed referring to when Jesus was sentenced to death by Pontius Pilate.  In Saint John’s hand, he is holding a golden cup with a dragon rising from the top.  This is an attribute of Saint John, for in one narrative he discredits the pagan gods by turning a cup of poisoned wine into a dragon by blessing the cup with the sign of the cross.  Stained glass windows contain symbols such as these that would have been obvious in their meaning and value to medieval English people, who were educated in the tenets of their faith by attending church. 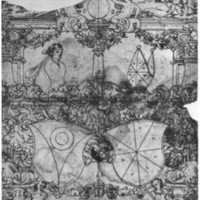 An example of a design for a stained glass pattern on paper.  Not many examples of these types of designs can be found today. 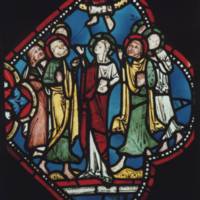 This example of a stained glass window is a main-light panel.  Originally at Westminster Abbey, the scene appears to portray the Annunciation of the Virgin Mary. 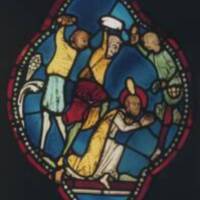 This stained glass was originally found at Westminster Abbey.  It is a main-light panel possibly depicting a saint being stoned.