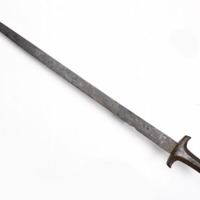 Daggers were common in medieval London, and this particular dagger is known as a baselard. The baselard is known for its long blade, comparable to that of a sword, and they originated in Basel, Switzerland, hence the name “baselard.” They were most likely popular with wealthy merchants and were worn at the belt. The baselard had a dual purpose: to provide protection and a sense of style to its wearer. Its long blade ensured that no one would miss the dagger hanging from a man’s belt. This particular baselard has a wooden handle, 108 mm in width and 132 mm in length. The blade itself is made of iron and is 650mm in length. Other baselards were described to have had blades mounted with silver. This baselard was found in Bull Wharf on Upper Thames Street.

While baselards are considered a type of dagger, there was still a distinction between a baselard and a dagger. A knight’s page would have carried a baselard, as opposed to a dagger, because carrying visible arms may have been provided a better sense of security when defending the gates of the city or a neighborhood. People of high status mainly used baselards, as opposed to servants and laborers, who were forbidden to carry baselards, among other weapons, beginning in 1388. This injunction against the carrying of arms may have been prompted by fears that some servants or people of low status may have used baselards, or other such weapons, to commit crimes. In a case regarding a murder attempt in 1383, a man had hired his servant to kill a man possessing a large amount of money. The servant used a baselard to stab the man, and he, along with his master, left the victim for dead. Another case, prior to the 1388 ban on baselards, involved the hacking of shields that bore the king’s coat of arms. In 1382, a servant was caught in the act, removing the paint of the shield with his baselard because of dissatisfaction with the marriage between King Richard II and Anne of Bohemia.

One of the most prominent uses of the baselard was during the Peasants’ Revolt in 1381. On June 15, 1381, Wat Tyler, the leader of the revolt, and Richard II met at Smithfield. This encounter led to the death of Wat Tyler at the hands of William Walworth, the Mayor of London, and one of the king’s men. According to the Chronicle of London, 1089-1483, “… William Walworthe, maire of London, drew his baselard and smot Jake Strawe [Wat Tyler] on the hed: and with that, Rauf Standyssh, that bar the kynges swerd, roof Jake Strawe through the body with a swerd; and there he fyll doun ded.” This act by William Walworth was considered to be a noble act, as he was made a knight shortly thereafter. Compared to the servant hired to stab a man so another man may take his money, this is a considerably nobler association with the baselard in history. 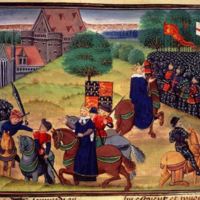 The leader of the Peasants' Revolt, Wat Tyler, is depicted here as being stabbed by William Walworth, Mayor of London. Walworth stabbed Tyler with a baselard, and although it is considered a type of dagger, in reality, along with this depiction, it is rather larger.