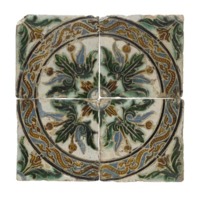 Ceramic floor tiles first appeared in medieval England during the thirteenth century and were mainly used to adorn the interiors of buildings associated with religious institutions. Tiles of various designs and colors decorated the flooring of important buildings such as churches, monasteries, and chapterhouses. Some religious buildings used mosaic­style tiled floors, with individual tiles of one or several colors and patterns devoid of religious significance, while had tiles depicting important Christian scenes or emblazoned with Christian symbols. The most popular pattern was the f​leur­di­lis,​which is associated with the purity of the Virgin Mary in Roman Catholic iconography. This association derives from the baptism legend of King Clovis, the early sixth century founder of the Frankish Merovingian dynasty, that claims the Virgin handed him a lilly that sprang from the tears of Eve as she left Eden­ this lilly being the fleur­di­lis. Floor tiles did not have any religious or ceremonial value in of themselves; yet, along with other embellishments, like stained glass windows, they contributed to the spiritual majesty and iconography of Christian buildings in the Middle Ages.

Despite their prominence in religious settings, ceramic floor tiles also appeared in secular contexts, exemplifying the porous boundaries between secular and religious life in the medieval era. They appeared mainly in the homes of the nobility and royalty during the thirteenth century. These tiles came in a variety of styles­ as plain mosaics, geometric designs, and may have even displayed symbols of prestige, such as a family crest. Tiles containing secular imagery, like family crests, were also found in churches and monasteries. These tiles indicated an individual's patronage to a local parish church or monastery and, therefore, their piety in the eyes of the community. These emblems of devotion also indicated one’s wealth and social status, especially those in London churches during the thirteenth century, as they were expensive to produce and export. These tiles traveled long distances in order to get to London from kilns in rural areas­ a process that could only be financed by those wealthy enough to front the costs of production: the gentry and the church.

During the fourteenth and fifteenth centuries, the manufacturing of floor tiles became more efficient and absorbed into the larger ceramics industry, resulting in a move away from church and gentry­owned kilns to commercial kilns located on the edge of towns and cities, which opened up the tile market to London consumers. The decimation of London’s labor force in the Black Death led remaining craftsmen to standardize floor tile production in the mid­fourteenth century. This technical development, combined with increased demand for craftsmen and modest economic growth, contributed to the emergence of a burgeoning tile industry east of the city walls and across England in the wake of the Black Death. Floor tiles thus became more available to the rising merchant classes in London and to London churches. Despite their increased availability, domestic floor tiles remained a symbol of social status; however, the wealthiest parishes and individuals set themselves apart by purchasing expensive high­quality imported tiles from continental Europe.

This floor tile set is an example of these widening tastes. It was discovered at the site of All Hallows­Lombard Street, a medieval church located in the eastern section of the City of London. Found during the site’s excavation in 1940, this set was imported from Seville, Spain, around 1500, and 142 mm in width, 143 mm in length, 26 mm in diameter. It is made of ceramic and earthenware, and made in the c​uenca seca p​rocess. This process involves sinking individual design molds into the clay, leaving a narrow line around each part that allowed for different colored glazes to be used without running. This Islamic­inspired technique produced sharp ceramic designs foreign to England at the time. This set’s sharp borders between the floral and circular patterns, as well as its use of beautiful gold, green, and light blues, may have appealed to fashionable tastes in medieval London. This style was used among Spanish royalty in the court of Manuel I and in the pavilion of Charles V, which is located in Seville’s Alcazar Gardens. Very few c​uenca t​iles have been found in England and even fewer in London, making the All Hallows discovery a very rare find.

This tile arrived in London during a time of growing religious discontent in the early sixteenth century. Regardless of whether it was procured by the Church or given by a wealthy donor, there is no record of how it came to All Hallows, but it was likely that it had taken on a new life in its community as an embodiment of the Church’s opulence and wealth. It is telling that it was recovered from the excavation of the site, and not from the church’s floor pre­demolition. One may posit that, during the Reformation, it was likely either tucked away for safe keeping or taken out to make way for more modest designs. 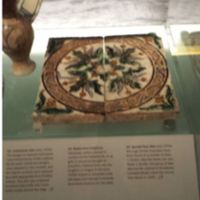 The set of cuenca seca floor tiles recovered from All Hallows Church, Lombard Street are displayed in the Medieval Gallery of the Museum of London. They are situated in a display highlighting the aretfacts of London's fine material culture in the Late Medieval/Early Modern period. 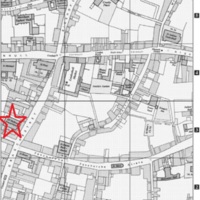 A map with a red star indicating the location of All Hallows Church, Lombard Street - where the set of cuenca seca tiles were found. It is at the intersection of Lombard and Gracechurch Street in the City of London, north of the present-day Monument tube stop. Note: the church is referred to "All Hallows, Gracechurch" in this map. 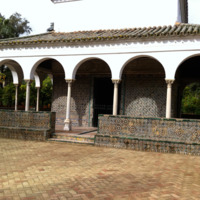 Emperor Charles V's pavilion at the Alcazar Gardens in Sevile, Spain. A demonstration of the beauty of cuenca seca tiles and their popularity among the elite.