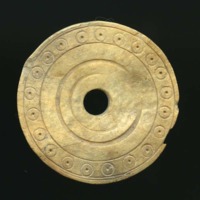 Games and recreational activity helped shape much of the culture in the Middle Ages. Both adults and children took part in recreational activities for fun, for money, or for socialization. There were many forms of recreational activity including sport games, childhood games like tag and hula-hoop, and board games. Board games included chess, backgammon, fox and geese, dice, and checkers. Many of these board games required game pieces, which differed from game to game. For example, there were pieces specific to games like chess and checkers. Many of the game pieces found by archeological excavations have been of a similar kind.

These medieval game pieces, small and circular in shape, are usually made with materials like bone, ivory, or wood. Game pieces usually varied in color and can be shades of yellow, brown, and white depending on what material was used to create them. Game pieces were created by carving circular shapes out of various materials and were decorated using either pieces of sharp bone or knives. Some game pieces were plain and minimal in decoration while others had lots of decoration and unique details, such as line patterns, circles, animals, and holes.

It is likely that these circular game pieces were used to play board games, specifically backgammon, one of the most popular board games of all time. Backgammon dates back to about 5,000 years, and is said to have originated from somewhere in the Middle East or Asia, specifically from Iraq. The game was likely to have come to England during the eleventh century and gained popularity among the wealthy and the clergy. Backgammon requires a person to role the dice and move the game pieces accordingly until one person removes all of their pieces from the board and wins. Because the game uses dice, and was sometimes even played for money, the church condemned it because playing for money was considered gambling. Gambling was a sin because it represented the love for money and relied on things like luck, all of which the church was against. At one point, the church tried to outlaw backgammon, but its popularity endured.

Backgammon remained popular throughout England among children and adults, but was not the only popular game played in England during this time. In fact, games of all kinds played a huge role in medieval London. When children were young, they played games, which included tag, hoola-hooping, or throwing stones. Games differed depending on the age of the child. When one moved away from the younger childhood games, they mimicked games adults played like wrestling, sword fighting, and archery. Sports similar to football, baseball, and horseback riding were also very popular at the time and attracted many players and fans. Children also learned how to play games like dice, checkers, and backgammon. Some people considered these games to be inappropriate because they distracted children from their responsibilities, but these games also required children to use strategy and reasoning which are important and useful tools.

Like many game pieces of the time, this particular game piece displayed in the Museum of London is small, yellow in color, disc-shaped, and made of bone. It is decorated with circles and line patterns and in the center of the piece is a dot ornament (hole). Additionally, the right side of the game piece is slightly chipped. The measurements of this piece are: 52 mm in width and 4 mm in height. This piece came from Saxon- Norman London, manufactured at some point between the late tenth and early eleventh centuries. It was found near London Bridge at Regis House, which may indicate that it was used or owned by an individual in an area nearby. Both adults and children from the upper classes used game pieces like this since a game piece such as this one was likely utilized in games popular among the elites. 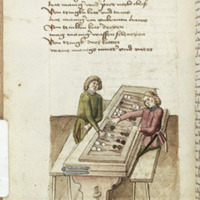 This is a pen drawing of two men playing a game of backgammon. One may see the backgammon board in between the men with the circular game pieces on top of it.