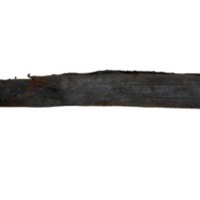 An iconic piece of medieval military equipment, the scabbard is an item used for storing a blade.  The scabbard is similar to a sheath in its shape and often in material composition, but specifically describes an object intended to store elongated swords rather than knives, or shorter blades.  Traditionally, the scabbard was fixed at one’s hip, or less frequently clasped to one’s horse, and facilitated easier access to the sword it contained.

Though modern culture often depicts the scabbard as mostly a medieval object, the scabbard is in fact known to be one of the oldest tools men have used, and is thought to have existed since the creation of the sword. The scabbard has an archaeological history dating back to the Bronze Age.  Though they are often metallic in in modern times, they were primarily composed of wood or leather in the medieval period.  In addition to holding one’s sword, a scabbard also provided some protection to swords against the elements, preventing degradation and rust, and helped prevent accidental injuries that could arise from moving around quickly with a bare blade.  Archaeological finds, particularly grave excavations, indicate that the scabbard was often fixed to a heavy belt at the hip, normally with a buckle or metallic clasp of ornamental quality.  Some recovered scabbards appeared to have been attached to belts via metallic loops, while others were simply fastened with leather straps.  When feasible, craftsmen would line the inside of scabbards with fine fur or an animal pelt in order to create a smooth draw, and to prevent the blade from wearing down against the inner seam of the scabbard.

Though the scabbard had many practical uses, it also had ceremonial and social value.  Knights often bore ornate scabbards, which signaled their prestige and social influence.  Scabbards from the medieval period thought to belong to knights frequently were made of precious metals and displayed fine patterning and craftsmanship.  Finer scabbards drew attention to one’s sword, and simultaneously could demonstrate the wearer’s social standing, as detailed metallurgical work was typically affordable only to wealthier individuals.  Several scabbards also exhibit meticulous metallurgical work, including word engravings, which is indicative of the craftsmanship of an experienced smith and which gave the scabbard a higher value to its wearer.  However, it is worth noting that ornate metal scabbards were rare, and certainly less representative of the standard medieval scabbard, which was either made of wood or leather.  The varieties in purpose and style of scabbards thus have historically ranged in quality and style, from minimalist willow holsters to heavy alloys ornamented in silver and gold.

The standard scabbard seems to have been made of leather, bound together usually by two or three wooden or metallic pins.  Sometimes the leather binding would be lined with wood, and a bronze mouth ensured its rigidity, though many scabbards recovered in London exhibit no lining, and look like large leather wraps.  While some scabbards were simple enough to have been creatable by an inexperienced leather craftsman, complex scabbards had components, such as metallic pins, which required inputs from smiths.  Scabbards tended to be around 38 inches in length, and were normally a few inches longer than the sword they protected.

This scabbard contained in the Museum of London collection is made of leather and exhibits some decoration in the form of simple lines created through impression.  Though the scabbard is tattered and worn, it still contains its original wooden lining, and exemplifies a typical medieval scabbard.

(Museum of London has not provided dimensions or measurements for this object). 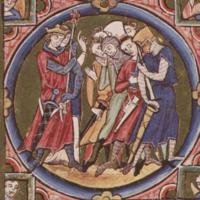 Depicted in the Psalterium non Feriatum, a group of knights and a king stand with a wide range of scabbards. The king's scabbard appears to be laden in silver, while the knights wield wooden and leather scabbards.