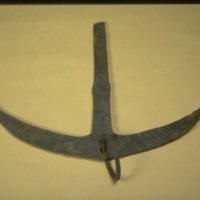 The word “anchor” derives from the Latin word ancora, originating from the Greek term ἄγκυρα (ankura). As defined by the Oxford English Dictionary, an anchor is a tool used for holding a ship in a particular place, by mooring it to the bottom of the sea or a river; it typically was “a heavy iron, composed of a long shank, having a ring at one end to which the cable is fastened, and at the other, branching out into two arms or flukes, tending upwards, with barbs or edges on each side,” giving the anchor a U-like shape. Anchors date back to the Bronze Age. In fact, before the development of iron anchors for maritime use, anchors were merely rocks or bags of sand.

A shipwright is responsible for constructing ships, along with other necessities required to make and sail ships. Anchorsmiths in medieval London typically made anchors from heavy iron or metals. Because the anchor was specifically used on ships, it is closely associated with sailors, as anchors were needed for docking and mooring ships to one spot.

This anchor, on display at the Museum of London, is made out of iron, like many anchors of its time. It is gray, dates between the ninth and eleventh centuries, and is broken at the shank. The crown is pierced and fitted with a loose ring, and the flukes are pointed, near the triangular section. Originally twice its length, it is now 600 mm in length, 900 mm in width, the diameter of its ring measures 165mm, and it weighs in at 14 kilograms. Discovered in the Thames at Blackfriars, it is likely that this specific anchor was attached to a large sea-going vessel.

While is unknown to whose ship this certain anchor was attached, one may make the argument that it could have been Viking in origin. In the mid-ninth century, Lundenwic came under attack and burned by the Vikings, who later returned there for the winter in 871-872. As a result, many Viking weapons and objects have been recovered in the River Thames and, therefore, this specific anchor can be one of many ship-related artifacts associated with the great maritime cultures of the Viking sailors.

Because of London’s close proximity to the River Thames, the establishment and growth of a maritime community became ever more vital with the expansion of long-distance trade and travel in the high Middle Ages. The anchor is one of the many objects which symbolizes London’s importance as a maritime community, which include the industry of shipwrights and anchorsmiths responsible for making ships and the materials (iron or a heavy metal) that ships needed in order to sail. Although the anchor may seem like a small part of a large sea-going vessel, it is still a significant object in the establishment of a maritime culture in medieval London. 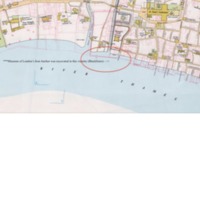 This is a full map which illustrates London in 1270. The red circle highlights the area in which the iron anchor, from the Museum of London was excavated, at the River Thames near Blackfriars. 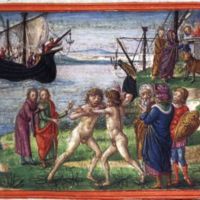 This manuscript dates between 1482 and 1485 and made out of parchment codex. The central scene is of Entellus and Dares wrestling in the nude; however, in the background, are large vessels weighing anchor. This manuscript is depicting “London Games and ‘Sicilian Games.’”