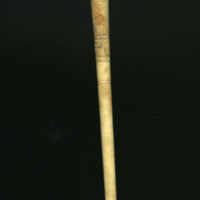 A stylus is a slender, tapered utensil used for writing on wax-coated wooden tablets. Styli and wax tablets were used since the classical Greek period, but their material composition varied based on time and place. While Roman styli were usually made of iron, styli crafted in medieval London were generally hand-carved from animal bone. While the tip used to carve into the wax was sometimes created simply by sharpening the bone into a point, most often a sharp metal tip was inset into the end of the bone shaft. Styli from multiple archaeological sites indicate that the bone tips were sometimes re-carved after breakage or the loss of the metal tip.

This particular stylus is made of bone and is missing its metal inset tip. The bone is a creamy white color, unlike some other bone styli in the Museum of London collection that are closer to a grey or brown color. The top of the stylus is spherical. This rounded top was used, much like the eraser at the end of a modern pencil, to “erase” writing in the wax by rubbing back and forth on the wax to smooth over the indented surface. This stylus is decorated with a protruding ridge underneath the spherical top, with two shallow, smaller ridges underneath said ridge that have been carved more deeply into the shaft. Three sets of two horizontal parallel lines decorate the rest of the shaft. There is some discoloration and damage to the bone at the top of the shaft, but the rest of the bone is in good condition. This stylus was made sometime between the thirteenth and fifteenth centuries. It is 84 mm in length and 7 mm in width.

Medieval bone styli have been found at archaeological sites throughout London, including Swan Lane Car Park, Custom House, Trig Lane, Baynard’s Castle, and Billingsgate Market Lorry Park. Writing with a stylus and wax was much cheaper than writing on paper in the Middle Ages, especially since the wax tablets were reusable. Styli were used for a number of purposes in medieval London, most notably for writing school exercises, legal records, and correspondence, although they could be used for any type of composition. It has been argued that these instruments were also used as markers for transferring embroidery patterns or as parchment “prickers,” used to prepare parchment for writing by marking horizontal lines.

The use of a stylus in medieval London had a strong association with education. Schoolboys would take their styli and wax tablets to and from school every day, and an account roll from 1395 from Winchester College notes the use of a green wax tablet and stylus used for keeping track of chapel duties. The stylus and tablet were associated with education for centuries: Saint Jerome recommended that, when first teaching a student how to write, a good method is to carve the characters into the student’s wax tablet for him, so that he may learn how to write by tracing his stylus through the grooves in the wax, and Roman writers Horace and Quintilian both individually stressed the importance of using a stylus and tablet because of the ease with which one can erase one’s mistakes. In medieval London, styli were likely not only associated with students, but also with the church, as styli and wax tablets have often been found in ecclesiastical as well as scholarly sites. Remnants of styli among the debris at the Anglo-Saxon double monastery of Whitby suggest that nuns may have acted as copyists. It is likely also that styli were used in an everyday domestic context, as they have been found alongside household items such as tweezers, needles, and quern. Archaeological and documentary evidence supports the contention that the stylus was a popular and essential tool for centuries within medieval London and throughout Europe. 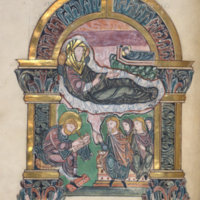 This is a detail from the illuminated manuscript of The Benediction of St Aethelwold, written by Godeman for St Aethelwold, Bishop of Winchester. The scene depicts St Elizabeth on a couch with the infant John the Baptist behind her in a crib. Beneath them, Zacharias writes John's name on a wax tablet with a stylus.