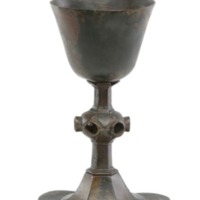 In medieval London, the chalice was a significant part of ecclesiastical life. It functioned to serve or hold consecrated wine in a church or chapel for the Christian tradition of communion, during which it was believed that the Eucharist and wine became the body and blood of Christ. The priest at mass used a chalice to serve the wine to his congregation. Additionally, he would bring a smaller chalice with him during travel for the same use, and was buried with a grave chalice for symbolic purposes. Medieval literature records chalices in variety of ways, such as being two-handled, made of silver, onyx or pewter. They were also, at times, important relics in the church’s large repository of sacred items. The chalice has a religious significance that extends beyond its use in church rituals; it is also a symbol of pride and an object of veneration for the church.

The chalice on display at the Museum of London was crafted from copper alloy, commonly known as brass. It measures 189 mm in height, and the base measures 130 mm wide. Today, the chalice appears to be a dingy, brown metal, similar to many of the medieval objects currently on display. This chalice is a cup held up by an ornately fashioned stem. The stem has a hexagonal design at its midpoint, and the base is in a six-scalloped design. This chalice was found in London Wall, and dates to the late fifteenth century.  It was most likely intended for burial with a priest from the local community in London. The present chalice was crafted in the style of typical English workmanship, which was one may see, specifically, in the hanging-bowl design of the cup, the cylindrical stem form, and its base decorated with with applied moldings.

A chalice was generally crafted from precious metals, such as gold, silver, or pewter. Simplicity in chalice design can indicate that it was a grave chalice, manufactured with the intention to be buried with a member of the clergy in his final resting place. The lack of ornamentation by way of jewels or precious metals on the chalice suggests that it was a grave chalice. Grave chalices in particular were most often made of silver, gold, copper alloy, or lead. The size of a chalice dictated its purpose. Small chalices, such as this one in the Museum of London, were for graves or travel. Larger chalices were used for liturgical purposes, to administer wine to the whole congregation, while a medium chalice was used only for the wine consecrated by and for the priest.

The chalice also possessed particular cultural meanings in its medieval London setting. The chalice was most closely associated with the Holy Grail, a mythical chalice purported to be the cup from which Jesus drank at the Last Supper. The lore associated with the chalice reflected the growing devotion among the population to the Catholic Church, and an increased participation in Church rituals, specifically that of communion. The chalice was not always a sacred object; originally, it was a supernatural charm. The legend surrounding the Grail, coupled with the rise of the Church during the Middle Ages, led to the chalice’s transformation as a a sacred, religiously significant object. The chalice became fully sacrosanct by the late fourteenth century, evidence for which can be seen, in medieval England, on the grave slabs marked with the symbol of a chalice, indicating the final resting place of a priest.

Medieval romance literature frequently referred to chalices, especially as they were culturally resonant symbols to discuss the ultimate chalice, the Grail. As a stand-in for the Grail, the chalice was also a symbol of chivalry. In most texts, the chalice, as the Grail, gives life or sustenance, these mythic qualities echoing the religious practice of communion. The cultural meaning behind the chalice ran parallel to the actual function of the chalice in the Church, as a means of eternal life. This object was richly important in the medieval period, and in medieval London especially, as the city was an urban location ideal not only for people to exchange tales of the mythical Grail, but also a place of strong church communities that used the chalice for every mass. 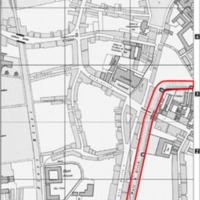 This specific medieval chalice was found in London Wall. The chalice dates to the late fifteenth century. The map is of London in 1520, and the red outline marks the London Wall, where the chalice was excavated.