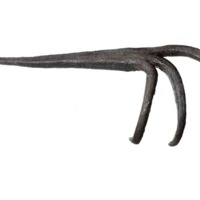 A culinary utensil used throughout medieval London was an iron flesh hook, also referred to as harpago. There are two main types of flesh hooks that survived from the period of the Etruscans in central Italy (c. 800-100 B.C.E.) to the medieval thirteenth century (1200-1299 C.E.). Etruscan bronze harpagos have nine prongs and are long in length. The medieval flesh hooks from the thirteenth century are shorter with “tanged or socketed stems,” commonly made of iron and with three prongs attached. The Museum of London showcases a flesh hook measuring 430 millimeters long and 40 millimeters wide. It has three distorted, iron hooks that appear as twisted fingers bent inwards, inserted into a wooden handle.

At first glance, flesh hooks resemble instruments of torture, which is what archeologists initially thought they were upon their discovery. The flesh hook’s actual purpose was to grab large chunks of meat from cooking pots in order to prepare and serve meats. Flesh hooks emerged in Europe around the same time as cauldrons, suggesting that they are used together. The curvature of the hooks was meant to protect the pan as well as secure the meat in the prongs. This tool was critical for a medieval cook and was familiar to all of society because of the large consumption of boiled meat. More elaborate flesh hooks are associated with elite ritual feasts and held high symbolic value. The increasing number of ornamented flesh hooks in the Middle Ages may have suggested that they were also status symbols. Archaeologists believe flesh hooks were also used to examine and taste meat as it was cooking over a stewpot in order to verify that it had been properly cooked. Medieval cauldrons were massive and “large enough to cook a man,” reinforcing the necessity of flesh hooks to grab meat and provide a safe distance from the cauldron.

Earlier uses of the flesh hook were for ritualistic purposes. They can be traced back to the Old Testament, which refers to Israelite priests pulling sacrificed meat out of a cauldron. Many medieval paintings portray flesh hooks in the hands of the devil. 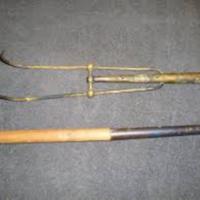 An image of Little Thetford flesh-hook, the first flesh-hook found in England. Made of bronze and wood. The hooked part length is approximately 30 cm and the butt end length is about 15 cm.