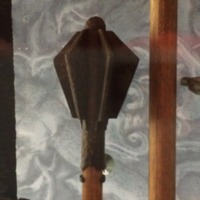 The mace, which gets its name from the Middle French masse d’armes and the Latin mateola, originally referred to an agricultural implement. The mace is a type of blunt weapon that was popular for close combat, especially during the medieval period. It is a weapon of a relatively simple design and evolved from the club, which is considered to be the simplest, and perhaps even the first form, of weaponry. The mace, however, differs from the club in that, rather than being merely a large stick with which to strike an opponent, it is a large stick with an even heavier material attached to the top, thus allowing the wielder more striking power. These heads are usually crafted from stone or some form of metal, such as copper, bronze, iron, or steel, and can contain protrusions in order to allow the mace to penetrate heavier armor. The frequent use of the mace led to the creation of more protective forms of armor towards the end of the Middle Ages.

This particular mace, on display in the Museum of London, seems to be typical of those used for purposes of combat. Although the handle is a replica, the head of the mace was crafted from iron, sometime in the 1400s. The weapon is 550 mm in length and 105 mm in width, and was capable of delivering a debilitating strike to an opponent. As one can see, it sports multiple flanges, thus allowing the bearer to pierce heavy armor. It was likely unearthed in the Greater London area.

It is unclear when, exactly, the mace came into existence as a weapon distinct from its predecessor, the club, though we do know it has been in existence for a very long time. Another exhibit within the Museum of London shows a stone mace head from c. 2,900 – 2,100 B.C.E., which suggests that the weapon is of great antiquity. The mace was used as a weapon during the Norman Invasion of 1066. In the Bayeux Tapestry, Odo, the Bishop of Bayeux and half-brother to William the Conqueror, is depicted riding into battle wielding a mace. Although one may not necessarily think of a Bishop as taking on a combative role, the blunt force of the mace would not shed blood (only internal bleeding), and as a result provided a loophole in which religious men could still fight.  Maces were used throughout the Middle Ages, as they were one of the more effective weapons for close quarters combat with a heavily armored opponent. Much like swords, axes, and other medieval weaponry, the advent of gunpowder took the acts of bludgeoning or slicing a foe out of style, though the mace was able to evolve as a weapon with the advent of gunpowder. In the armory in the Tower of London, there is a combination mace and wheel lock pistol, which, in a way, is similar to a bayonet on a rifle in that it would allow an individual to both shoot and bludgeon an opponent to death. Death, however, was not the only purpose of a mace, as they could also be used as a physical manifestation of authority. Ceremonial maces can, and were used by, certain officers in legislative bodies as symbols of their power and status. 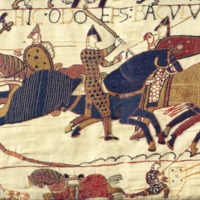 This is a depiction of Odo, Bishop of Bayeux, wielding a mace during the Battle of Hastings in 1066. From the Bayeux Tapestry. 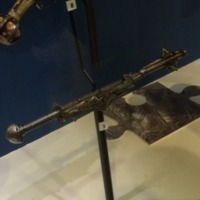 This is a combination firearm and mace from the 1560s.