Carved Shield of the Arms of England and France 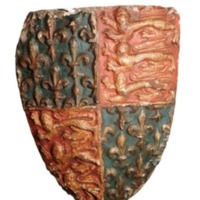 Heraldry is the identification of a particular person or group by a coat of arms, which began to develop around the twelfth century. These identifiers were first used for military purposes. Often carved into shields, a coat of arms distinguished individual armies from each other and from their enemies. However, throughout the medieval period, these symbols began to indicate chivalry, nobility, and ancestry.

The first coats of arms were rather simple checkered or chevronny patterns. As they became associated with particular noble families, and as those families began to intermarry, elements were added to these basic patterns. By the fourteenth century, when this specific shield is thought to have been made, using heraldry had become an established practice and each image on a coat of arms held special meaning. During the reign of King Edward III, coats of arms began to hold the power to determine one's social recognition. Nobles and their kin were granted a coat of arms, which signified a person’s lineage and position, by the king. Feats of Chivalry and courage could also earn a less wealthy soldier a coat of arms, which he then could proudly pass on to his successors. These knights often had considerable land and were unlikely to be the poor foot soldiers. Knights of lower status, known as esquires, occasionally recieved coats of arms. Frequently these coats of arms were carved into shields, which are called “shields-of-arms.”

The meaning of chivalry fluctuated throughout the Middle Ages. During the Hundred Years' War, chivalry was mainly used in the traditional sense of military bravery. But with the advent of heraldry and the meticulous recording and preservation of genealogical charts, gentility began to hold greater importance in the later fourteenth century. When the wars ended, ancestral ties to famous old warriors, rather than lesser-known soldiers, also became an important factor in determining one's claim to a coat of arms. The exclusivity of heraldry increased in the late 13th and 14th centuries.

This particular shield is 630mm (about 2 feet) in height, 510 mm (about 1 2/3 feet) wide, and 160 mm (half a foot) in thickness. It was manufactured from stone and weighs about 38.5 kg (about 85 lbs). Given its weight and material, it was likely used for decorative purposes. Similar shields were also carved into the walls of Westminster Abbey. It could have been also part of a greater stone effigy, such as those found in Canterbury Cathedral. Frequently, homes would be decorated with stone statues of knights holding shield and arms. In the mid-nineteenth century, when London's Guildhall was being reconstructed, this artifact was discovered in the roof of the building. The shield depicts six lions, divided into groups of three. The shield also depicts the royal insignia of England, as well as a field of fleurs-de-lis, which are also on the royal shield of France. The lions are set against a red backdrop and the fleurs-de-lis against a blue one, indicating the royal colors of England and France, respectively.

Dating from the time of Edward III's reign in England, this coat of arms bears relevance for the political and military conflicts of the Hundred Years’ War between France and England. The war was a battle over the control of France. Edward III felt he was rightful king of France and so in 1340 he unified the gold lions of England with the fleurs-de-lis of France on his coat of arms to represent his claim to the French throne. Such an action likely has the effect of intensifying the friction on the battlefield. Only in 1801 were the fleurs-de-lis removed from the English coat of arms.

As Guildhall was the center of civic government, the stone shield which hung there was likely a symbol of London's loyalty to the king, indicating the great presence royal power had in civic politics. 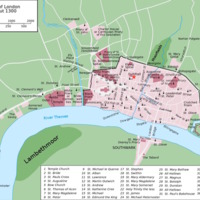 This is a 1300 map of London on which I marked, with a red star, the location of the Guildhall, since that is the location in which this stone shield was found. 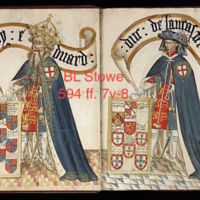 Edward III and Henry, Duke of Lancaster, wearing blue Garter mantles over armor and a surcoat with their coats of arms. In the framed gold tablet each holds is displayed the arms of successors in their Garter stalls. 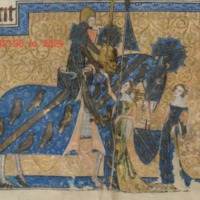 In this illumination, a knight with the Luttrell arms appears armed on horseback, attended by two women, one of whom is identified as Agnes Sutton.