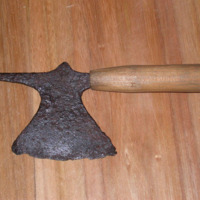 During the Middle Ages, the knife came in a multitude of forms, but were all used in a similar way: to cut through a specific object or specimen. Blades that come from medieval knives are commonly recovered from archeological excavations.

With these finds, it is assumed that when produced, all the knives came with two main parts: the blade and the handle. Throughout the Middle Ages, the uses of the knives depended on the variation of the physical aspects and the materials that were used to make the blade and handles. These variations especially can be seen in the different shapes, widths, and styles of the blade. For example, if the knife was thinner it was mostly likely a knife that was more useful for work that was not too strenuous. If the knife had a long blade, it could be a knife that was used for eating and preparing food. If the knife had an even longer, broader blade it could have been used for carving food. There were even knives that were used as tools for specific crafts, like the “half-moon” knife.

This half-moon knife dates to the fifteenth century and measures 83 mm in height, 143 mm in width, and 193 mm across the handle. It, like many other knives of the period, is made of iron. It is dark in color, and, true to its name, is in the shape of a half moon. In addition, it has a protruding blade at the top.

The half-moon knife, which has been around since the eleventh century, was used specifically in leather-crafting, such as shoe making. It was used for cutting the animal skin (that would be made into leather). The knife itself, as a whole, has not evolved very much and is even very similar to a modern day half-moon knife. Its shape and purpose, however, varied according to the task at hand. For example, if the skin of an animal was particularly thick, then the craftsperson would have needed to use a thick type of half-moon blade in order to cut through the skin.

In Medieval London, these half-moon knives were important because they were made and used by many different craftspeople. There were different guilds for the craftspeople who made the different portions of the knife. There was the Bladesmiths, who were responsible for manufacturing the blade. Their job was forging the blade, a process involving the hardening of the irons from which the blade was fashioned. Traditionally, it was made from one type of iron.

Additionally, there were a great number of craftspeople, such as shoe makers and upholsterers, who worked with leather in medieval London. There were many uses for leather; it was a material that was used for making pots, hunting gear, and shoes, to provide only a few examples. The half-moon knife is not only the oldest tool used for leather working, but it is also one of the most prominent instruments in the trade.

One important group of these craftspeople who worked with leather, the Cordwainers, used a half-moon knife to cut the leather for shoes. They worked with the leather of shoes, which cost about 6 pence per pair, for customers of a variety of socioeconomic levels. Shoe-makers were usually in a lower to middle socioeconomic level themselves. Therefore, people who worked with these knives were most likely in the same level as well. 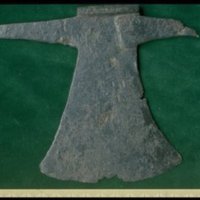 This is another example of the half-moon knife that was used specifically to cut leather. It is made from iron, and is used in leather work. It is measured as having a height of 120 mm, and a width of 160 mm. 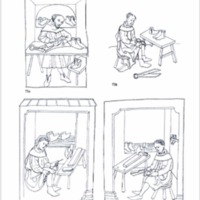 In this image, it shows a shoemaker working with the half-moon knife. In the first portion, it shows the shoemaker in action using it to cut the leather that will be used for the shoes.