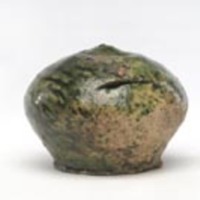 The art of making pottery in London effectively disappeared by the 1300s. By the late medieval period, as much as two thirds of all pottery used in London can be attributed to artisans in Surrey, specifically the areas of Cheam and Kingston. Surrey white ware, the kind of pottery used to make this money bank, was produced primarily to be sold at London markets. That a highly specialized, local industry of ceramic ware developed and thrived in Surrey was entirely dependent upon the large market and demand for these wares in London.

This particular money box is important to the history of London’s material culture because it was found intact. It was most likely never used, as no money was found in it. Money boxes were used as piggy banks from the 1300s through to the 1500s. They are rarely found intact, as in order to remove the money, the box had to be broken. These medieval money boxes are analogous to modern piggy banks, and were used to save money until it was needed. After they were broken, they were never used again. Some money boxes were made from other materials, such as wood, which allowed them to be outfitted with padlocks. These boxes did not need to be broken in order to access their contents, however, and the locks made for these boxes were only strong enough to hold small containers. Money boxes proved to be very important to the artisan culture, and were frequently made from a copper alloy that was sold at a high retail price.

There is some evidence that money boxes had an important place in the lives of children. On the feast of St. Stephen, which is on December 26, money was traditionally given to children. Christmas celebrations in the medieval period continued throughout the Twelve Days of Christmas. As custom would have it, on December 26 children took their money boxes and smashed them to the ground. They would collect money and use it to buy Christmas treats.

Money boxes were also important for adults. During the medieval period, banks were virtually non-existent, and people frequently kept their savings and wealth in their homes. As a result, they needed a way to conceal their money to prevent it from being stolen. Money boxes, among other containers, were used to coins, and were buried or concealed in the walls of the home. These hidden containers are incredibly valuable to archaeologists when they are found because they often contain quite a number of coins that would have been otherwise difficult to find. 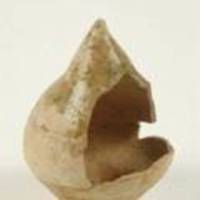 This is an unfinished money box. It is Surrey white ware, but the green glaze was never added. It has been broken open on the side.