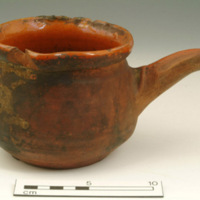 Archaeologists have uncovered many fragments of medieval pottery, especially from the Thames waterfront. The fragments have dated as far back as the tenth century and up to the fifteenth century. Through an assessment known as petrological analysis, archaeologists are able to determine the ages of these artifacts through the study of the rocks that compose them. In medieval London, different kinds of pottery were used, and they are divided into different categories. These categories correlate to different eras, and the pottery in each category is distinguished by several factors, including whether they were imported or exported, where in London they had originated, as well as the various materials and methods used to craft them. For instance, during the late Saxon period, more pottery was traded from Oxford to London, whereas in the late twelfth century, glazed ware was exported from London to different areas of England, and even to places outside of the country.  Pipkins are ceramic items used as saucepans, and most likely first appeared in the thirteenth century, and were used well into the late Middle Ages and the Early Modern period. By the fifteenth century the pipkin was a common item that could be found in most medieval households. The pipkin is a round bowl of about 3 feet in diameter, with a hollow handle coming off of one side and angled slightly upwards. Pipkins were an everyday item used for cooking and for storing food; to use it, a person would place a pipkin on top of hot coals in order to heat the contents.

Pipkins are a type of pottery classified as “Early Surrey coarseware.” They were made in “white-firing clay,” although the carbon used during production would contribute to a darker overall color. Usually pipkins were not fancifully decorated, aside from the glaze on the inner surface. Materials used to make pipkins include ironstone, quartz grains, sandstone, and other items that were specific to West Surrey - hence the origin of the name. Other items that are included in the category of Early Surrey wares include cooking pots and spouted pitchers. The products of Early Surrey coarseware were most commonly imported into London from other parts of England. The pipkin is just one of four glazed pottery items that were popular during this time, along with the dripping dish, chasing dish, and jug. The pipkin, however, is the earliest known example. In general, this “coarse London” ware is a type that is made of a mixture of sand, quartz, ironstone, sandstone, flint, and shell fragments. The glaze was applied by a process known as “splashing.”

An interesting aspect of the pipkin in particular is its physical shape in relation to a suggested metaphorical meaning. Research has proposed that the creation of medieval pottery to reflect male and female sexuality is a prevalent theme among household objects. The round-shaped bowl of the pipkin has been suggested to represent a woman’s womb. This shape alludes to the pipkin having a double meaning for both fertility as well as good fortune.