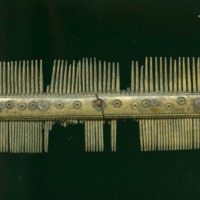 The word “comb” originates from a Germanic noun, and in Old English it became cǫmb or camb. Its first documented use was in the year 700. Geoffrey Chaucer referred to “combe” in 1384. According to the Oxford English Dictionary, a comb is “a strip of wood, bone, horn, metal, etc., with indentations forming a series of teeth, or with teeth inserted, along one or both edges; used for disentangling, cleaning, and arranging the hair.”

Combs in the medieval period served a dual purpose. The side with the teeth placed closer together would be used to rid hair of lice. Double-sided combs featured another side with teeth further spaced apart, which allowed individuals to comb through hair and disentangle it. Even though it was not customary to bathe frequently in the Middle Ages, people took pride in their appearance, and a well-groomed plait was vital even when hair had not been washed.

People of all social backgrounds used combs in the medieval period. One may even conjecture as to the social status of the owner by the material and level of craftsmanship used to make the comb. In the early medieval period, people used bone and horns to carve them into combs. People began to use other materials with the revival of long-distance trade. Ivory became one of the most common materials used to make combs. Every home in medieval London had combs, made of a variety of materials and of varying quality.

In the early Middle Ages, in fact, combs had a great deal of value, as they have been frequently found at sites of cremation. Archaeologists have uncovered pots filled with valuable goods, such as combs, smaller pots, and jewelry buried next to human remains, and have concluded that these items would not have been buried with the dead unless they were of vital importance. Individuals had far fewer personal possessions than we have today, and so to own an everyday object, such as a comb, likely meant that owners formed emotional attachments to these items. This attachment would have grown exponentially if the comb were given as a gift, or carved by a loved one.

This particular comb measures 122 millimeters in length, 42 millimeters in width, and 10 millimeters in diameter. Comprised of bone, this double-sided comb has darkened with age and has a rustic, light-brown coloring. On the upper-side of this comb, the teeth sit extremely close together and chunks have been broken off in two significant places close to the center. This breakage may have happened because of frequent use or on account of its great antiquity. On the opposite side, the teeth are larger and further apart. This side of the comb has suffered less damage, despite a few missing teeth. A decorated section in the middle connects the two sides. The simplistic pattern of intermittent circles lines the middle portion of the comb. Since this comb is made of bone, it was likely carved from one piece rather than manufactured and put together from several pieces. I believe that relatively high level of craftsmanship went into the making of this comb, and if it had been sold at market, it likely would have fetched a good price because of its adornment.

This comb is currently at the Museum of London and, while it does not indicate the site of its excavation, one may assumed that combs were a vital part of daily life in medieval London and beyond its city limits as well. The importance of combs increased in the sixteenth century with the arrival of ivory combs from global trade markets (Adkins and Leitch 351). Undoubtedly, bone combs continued to be in use throughout medieval London, much as modern combs are today, because they were not expensive as those made of ivory. 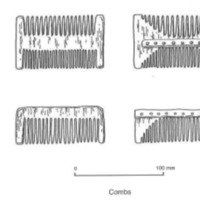 The Handbook of British Archaeology illustrates the different types of combs in use during the medieval era. These drawings help provide viewers with a complete image since combs are so rarely found without damage. 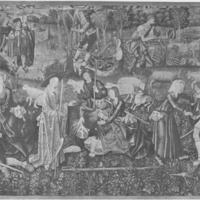 Made in Flanders in the sixteenth century, this tapestry entitled La Main Chaude features a shepherdess with a double-sided comb hanging from her belt.