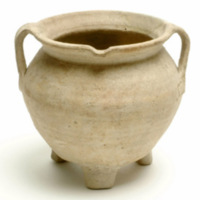 From Latin origin, the term cauldron is derived from caldrius, meaning “hot.”  This word provided the root meaning for caldarium, a cooking-pot and the Anglo-Norman French cauderon, from which came the Middle English word caldron in the fourteenth century.  A cauldron is a round pot made from ceramics or metal alloys that either stands on three legs or hung directly over a fire. It may also have adjustable hooks or attached to a chimney crane. The cauldron in medieval London was a domestic cooking vessel.

Cauldrons began production in the early twelfth century and remained in use throughout all of Northern Europe until the eighteenth century.  In Medieval England, cauldrons were manufactured not only in London, but in Bristol, Nottingham, Norwich, and Salisbury as well. Potters and brasiers, craftspeople accustomed to working with brass, manufactured cauldrons.

The cauldron was primary used for cooking, so they were present in almost every medieval London household or kitchen, whether rich or poor.  In wealthier households, cauldrons were found in the kitchens, alongside ovens and hearths. People of lower social status in medieval London often lived in single rooms, with a fire in the middle that supplied heat and light.  This fire was also used for cooking, and thus the cauldron was located in this main room. The cauldron was often the only cooking vessel available for many households, making it an essential item for daily use.  While most cauldrons did not have much in the way of monetary value, they were valuable as cooking tools, passed down through generations of families, which may have given them sentimental value.

Because the laboring poor also used cauldrons, some were made of lower quality materials so that they would be cheaper to buy. Some were made of ceramic, while others were made from metal alloys. Cauldrons often had low levels of tin and high levels of lead alloy, making them weak and brittle.  When placed on a fire for too long, the legs of cauldrons would often break because of the high lead content causing oxidation.  This oxidation caused the sturdier copper alloy to dissolve, therefore many medieval cauldrons have missing legs.  On the other hand, richer people in medieval London were able to afford cauldrons with higher levels of tin and copper, allowing their cauldrons to last much longer.

This cauldron on display at the Museum of London, dating between the middle of the thirteenth and fifteenth centuries, is 160 millimeters in height, 180 millimeters wide, and has a diameter of 145 millimeters. It is made of ceramic and earthenware (a porous type of pottery).  The cauldron’s light beige coloring has been preserved, and it is in good condition. The cauldron also has three small legs at its base, which meant that it was likely placed directly over a fire for cooking. 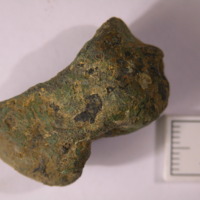