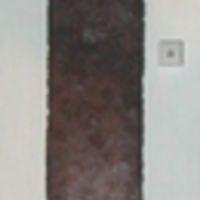 A sword, in its simplest definition, is a hand weapon consisting of a long metal blade (traditionally upwards of 20” in length) and a handle or hilt. The word sword originates from the Old English sweord, meaning “to wound” or “to cut." Similar to knives, machetes, or other bladed instruments, swords are cutting and thrusting weapons intended for short-range combat.

Swords became tactically superior to other cutting and thrusting weapons due in part to their comparatively longer reach. Although the concept of a longer bladed weapon seemed favorable early on, the production of such was hindered by the technological limitations of early metallurgy. In the Bronze Age, metallurgists developed alloys tough enough to produce stronger, and therefore, longer blades. With the development of metal alloys such as bronze and copper, the sword came into being during the third millennium B.C.E.

In the Middle Ages sword technology had improved considerably. Blacksmithing techniques such as tempering and hardening developed, and strong metal alloys such as Damascus steel became readily available. Improvements in metallurgy and blacksmithing, combined with the considerably high demand for bladed weapons during this period, meant that swords were produced in large numbers and in all shapes and sizes. Some of the most popular types of swords were long swords, short swords, broad swords, bastard swords, arming swords, scimitars, and sabers—all of which varied in blade length, material composition, and style of use.

Although knives and daggers were popular amongst the civilian populations of medieval London, only wealthy men of higher socio-economic status or armored knights owned swords. Richard the Lionheart, King Arthur, Edward the Black Prince, and Edward III of Windsor are amongst the legendary knights and warriors of medieval England. With their swords, these military leaders fought foreign opposition and protected the sovereignty of their nation.

Sword ownership was so much a privilege of the brave and distinguished that an ordinary Londoner found carrying one could be arrested. Moreover, unlike with the manufacturing of daggers, axes, and spears, only skilled specialists–metallurgists, blacksmiths, bladesmiths, and swordsmiths–crafted swords. The high quality of work that these professionals dedicated to the manufacturing of traditional long swords, broadswords, and sabers are what made them the main weapons in the professional warrior’s arsenal. They were the tools with which the soldiers and military leaders of the ‘age of chivalry’ could defend their people from foreign and domestic threats, and they were a symbol of national strength and military might. 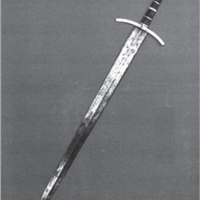 This sword is believed to have been owned by Edward III, King of England (alternatively known as Edward of Windsor) sometime during his reign (1312-1377).