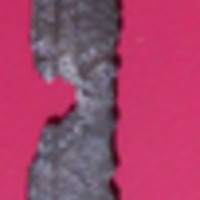 This individual seax on display at the Museum of London can actually be categorized as a scramaseax, a sub­classification of this medieval fighting and hunting instrument. Wrought of iron, it stands at 772 mm in length, with 610 mm reserved for the blade, and 44 mm thick at the center. Dating to the Middle Saxon period, either from the eighth or ninth century, it was found at the bottom of the Thames River, possibly thrown or dropped into the river during a battle.

The seax was a dagger­like weapon used most frequently by the Northern European and Germanic tribes during the so-called Migration Period, following the fall of the Roman Empire and well into the early Middle Ages. The word seax comes from the Old High German root­word saks, which means “to cut,” and historians also believe the Saxons derive their name from this weapon. A seax is different from other swords and daggers primarily because of its long, single-edged blade, and heavier mass of gravity. The weight distribution behind a single sharp edge meant the seax could be particularly effective for hacking at trees and branches, as well as skinning animals, and severing limbs. As such, the seax was a weapon that combined the attributes of a sword and an axe.

An early seax was small, known as hadseax, and measured between 7.5 to 35 mm in length. These smaller weapons were prevalent between the mid fifth and sixth centuries, and used as tools more for  domestic activities rather than for warfare. Evidence suggests that in early Anglo­Saxon societies, wearing a seax on the belt was also considered a symbol of freemanship. As time progressed, seaxes got longer, thicker, and heavier, with the introduction of the broad seax and the langseax in the seventh century. The seax remained in use in England well into the ninth century, after the traditional double-edged sword became the commonplace weapon in mainland Europe.

The British Museum’s ‘Seax of Beagnoth,’ which dates to the tenth century, is the most famous of these weapons, excavated from the River Thames in 1857. Far removed from the weapon’s humble beginnings as a pocket knife, this blade was inlaid with ornate copper, bronze, and silver wire, as well as runic carvings that spelled out ‘Beagnoth.’ The runes on the blade were translated to identify not only its owner, but the blacksmith that crafted the blade, which has given us insight into Anglo­Saxon culture and our understanding of runes, as this weapon is one of the few blades to be unearthed bearing those types of inscriptions.

The seax on display at the Museum of London, as well as the Seax of Beagnoth at the British Museum, show that this type of weapon spread to the “Germanic” diaspora of barbarian tribes in Britain, and was useful enough to remain in use and in style for centuries thereafter. Although it was relatively simple for the average blacksmith to craft a seax, as opposed to a sword, which required much more finesse and time spent on the blade, skilled swordsmiths could craft a seax with other inlaid metals. This showed the value a warring culture such as the Anglo­Saxons placed on the seax, as weapon and a tool.