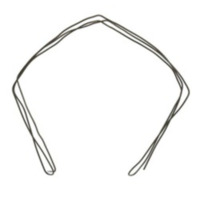 Headdresses were a staple for women in medieval London from the late 1400s to early 1500s. Headdresses were typically covered in silk thread. The headdress wires themselves had a taper or triangular cross section on the ends of them. This was necessary for securing the headdress frame on the head. In the medieval era, there was access to new fabrics, technologies, shapes, silhouettes, and tailoring not previously seen. With these various fabrics and materials came new fashion choices. Headdresses were a gendered item in medieval London, as women only wore them. Typically this was a stylish accessory for wealthier women, as the poor were unable to afford elaborate headpieces. For women of high social status, fashion was quite important; headdresses may have been visible markers representing their wealth, but they also indicative of marital status. A headdress worn by a married woman could be different than one worn by a single woman. The Queen of England in one portrait, shown hunting with her hounds, is wearing a very elaborate headdress, proving how important being well-dressed was, even when hunting. The Queen of England was known for a high fashion standard; fashion represented power and respect and signified ones place in society.

This headdress frame measures 198 mm in width and 184 mm in height. It is made from copper alloy, brown in color, and forged in the shape of a head, with three points sticking out. Headdresses were a way for women to show off their wealth and status. Fancier headdresses that were heart shaped were often worn for ceremonial occasions.  These were made from gold mesh and then decorated with jewels. These headdresses were regarded as very expensive and valuable, and often women mentioned them in their wills.

The profile of the headdress frame was also of significant importance. Diamond, or angular, profile was popular in the late 1400s and early 1500s. Headdress came in many different styles and sizes, and change according to new fashion trends. Another common headdress was the Gable headdress, as it was in the shape of a house’s gable. Caul headdresses were also very popular. They were staple-shaped, with a short frame and a net behind.

The headdress was used to exaggerate the forehead and eyebrows. In the 1400s, it was common for women to shave their eyebrows. The most interesting aspect of the headdress was the styles were constantly changing. There were many different styles and ways of wearing the headdress that emerged from the 1400s to 1500s. A hennin was one of the most extravagant headdresses, as it was characterized by its floating veil and was cone-shaped. Not all women wore a veil with their headdress. Many younger women preferred to have their hair flowing behind, while others kept their hair tightly tucked into the headdress. Another popular headdress for Englishwomen was the butterfly. The butterfly headdress was embroidered and draped over two or three wires.

Headdresses were found all around Europe, in London, Italy, France, Portugal, and beyond. Depending on where one lived, the style of headdresses that was popular at the moment changed. As you traveled from North to South, a completely different headdress would emerge. Headdresses were such an important item that special ceremonial ones were often passed along in people’s wills. Headdresses were very popular in London. The nobility wore headdresses, as did people in the middle class. Since they were so in demand, they were made all over London and easily accessible. Headdresses were a fundamental part of medieval society. 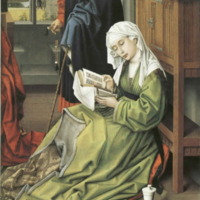 This piece depicts Mary Magdalen reading the Bible. Her headdress and clothing choices represent her wealth and the wooden keyboard shows the wealth of the family. 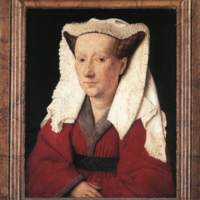 Portrait of Margaret van Eyck is by Jan van Eyck. It is 41.2cm x 34.6cm. This painting depicts his wife wearing a headdress. The artwork is said to be an intimate piece, and meant for private viewing instead of public.