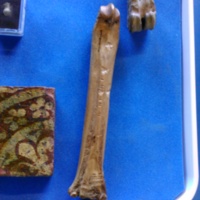 Bone ice skates were recreational gear made from the shin-bone of either cattle or horses. Medieval peoples attached the bone to the bottom of their shoes by drilling holes into the skate and threading a strip of leather through to attach them. While it may seem uncomfortable to use bones as a way to move across ice, researchers found that bone ice skates are smoother than expected because, according to Stephan Lovgren, “’the oily external surface of the animal bones makes a natural wax which limits resistance to motion.’” However, as Jackie Keily of the Museum of London notes, some of the bone skates that were found did not have holes through which a leather strap could be threaded. These findings suggest that some participants may have only balanced on the piece of bone. This could have caused plenty of accidents, such as the ones described by medieval London chronicler William Fitz-Stephen, who observed that, when an individual was struck down by another ice-skater, “one or both fall, not without bodily hurt..., and wherever the ice touches the head, it scrapes and skins it entirely. Often he that falls breaks a shin or arm, if he fall upon it.”

Research on bone ice-skates has made archeologists and historians conclude that their use dates as far back as 3,000 B.C.E. According to Lovgren, bone ice-skates originated in Finland for the purpose of survival. Since areas like Finland have long, frozen periods with fewer hours of daylight, inhabitants needed a tool that could help facilitate activities such as hunting. Bone ice skates gave people the ability to carry out these activities within shorter periods of time.

Bone ice skates reached London in circa twelfth century, and their design function evolved from one of survival to one of sport and recreation. Keily states that bone ice skates were a fun way to take advantage of the icy conditions in England during the winter season. The types of games in which Londoners participated are given in detail by Fitz-Stephen, who stated that ice skates were used with poles so that individuals may push themselves across the ice. These poles were sometimes used as ice-jousting equipment, in which the players charged at each other with their poles outstretched in attempts to knock one another off of their feet. Like balancing on the bone ice skates without ties, this sport also often caused injuries on the ice. Though Londoners did participate in the sport, as Fitz-Stephen described it, the fun was not just limited to England. The use of bone ice skates for playing games also occurred in Belgium and Holland, where people competed in ice skating competitions by tracing designs on the ice, and many tried to create perfect figure-8 drawings on ice.

Since bone ice skates were often used for sport and games, the item is most associated with children. The Museum of London pocket histories describe how London childhoods were often cut short because of disease and accidents. The discovery of bone ice skates shows that children did have time to play games even though they had to mature relatively quicker than modern children.

These particular bone ice skates are at the Museum of London, were discovered in London, and date to the twelfth century, around the time Fitz-Stephen was writing his now-famous description of London. They have been worn down on the bottom because of frequent use, and have drilled holes in the sides for the purpose of being tied on with leather. The long and narrow shape of the ice skates is made of the shin of either a horse or cow. Versions of bone ice skates from the Late Medieval period have curved ends. The curved ends would have helped push the wearer along the ice and allowed him or her to stop, like the modern-day toe-pick, as it made the use of poles superfluous.

(The Museum of London website does not provide measurements for the object). 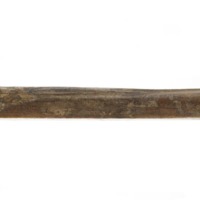 This image is a photo taken of the side of a bone ice skate. With this view it can be noted that the ice skate is of a beige to light-brown color, since the bone would not have been painted, and that the bone looks a bit worn. Also, that the ends of the bone are cut and that the top has a hole through it. The skates are worn down due to constant use, and the top has a hole for the purpose of giving the wearer the ability to tie the skates on with a threaded strip of leather. 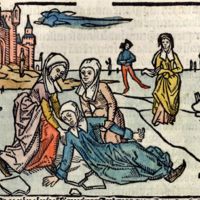 This image is an illustration titled "St. Liduina of Schiedam Falls on the Ice." It can be noted that the Saint Liduina's ice skates are curved at the end. This curve in the bone may have been an alteration created for the purpose of eliminating the pole that people originally used to push themselves on the ice. Like a modern-day toe pick, this curve would give the wearer a better ability to push-off and stop.