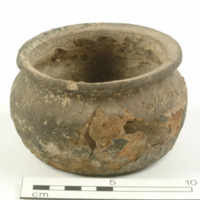 The cooking pot is an object that has stood the test of time. People all over the world have used it for thousands of years. A cooking pot is a pot that can be made out of many different types of materials and is used to cook numerous types of food. In medieval times, a cooking pot may have been more to people than simply a pot. A cooking pot may have represented security because it provided people with a basic need: cooked-food. It also was heavily associated with communal and social practices revolving around eating and sharing meals, as the cooking was an object that brought people together.

Cooking in these pots was so popular during the medieval period because it was economically efficient, and also the accustomed method by which most cooking was done during that period. Common types of cooking methods included stewing and boiling. The meat used during the medieval period was not always of the best quality, and thus, long slow cooking processes associated with the cooking pot were preferred as the best and most effective method to cook rough meat, which made it edible and easier to eat. Although many cooking pots appear to be similar- whether in materials, shape, or size- there were many different types of cooking pots during the Middle Ages, some of which were used for different types of cooking. For example, skillets or pipkins were smaller cooking pots, primarily used for specialized cooking, such as sauces, or used as regular cooking pots in smaller households. Bigger cooking pots included large cauldrons with three legs. These pots either hung over the fire from the ceiling or were placed directly over the flames. The three legs of these pots allowed them to be close to the flames, but not directly on them.

Archaeological evidence provides some insight into what exactly was cooked with different cooking pots in medieval London. Cooking pots that were excavated from the Trig Lane site in London contain trace amounts of residue of meat and dairy products such as milk, butter, cream and cheese. Butter was a common ingredient in sauces during this period, and milk and cream were often used to make desserts.

This particular cooking pot was produced sometime in the Saxo-Norman period; that is, between the middle of the eleventh to the middle of the twelfth centuries. This pot is ceramic 80 mm (about 3.15i n.) in height, 123 mm (about 4.84 in.) in diameter. It is dark gray in color, seemingly accented with other lighter colors. The wear on the color is most likely due to the age of the pot and the conditions it was in before its excavation. This cooking pot was most likely handmade, like many of the other ceramic cooking pots at the time. 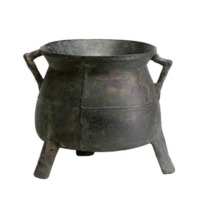 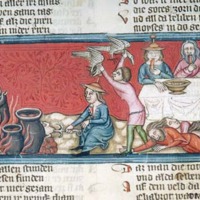 This particular scene displays communal dining in the medieval period. Multiple cooking pots were used to in order to serve larger groups of people. The cooking areas in houses were also many times in the same rooms in which people did other activities, such as sleeping as the four men are doing. 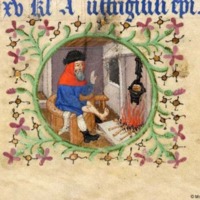 This MS depicts a man warming his feet over the open fire. What seems to be a metal cooking pot hangs over the fire. It is right to assume that the woman of the household had started the fire prior to the man returning home.