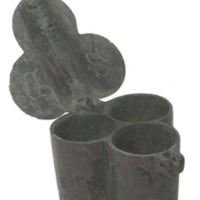 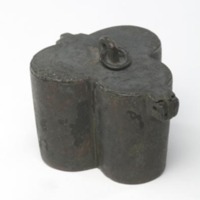 Derived from the Greek word chrisma, meaning “anoint,” the same root word for Christós (or “anointed one”), the chrismatory was a receptacle for the oil used in sacramental rites of passage and church ceremonies. The use of oil in religious practice dates all the way back to the Old Testament, the first reference being to a ceremony anointing Aaron, the high priest, and his descendants. In the Gospel of Mark, the disciples cast out demons at the same time they anointed and healed the sick. Jesus himself is anointed in Bethany with an expensive ointment of “pure nard” poured over his head. Because oil was costly, in frequent use, and integral to the administration of certain sacraments, the chrismatory was a convenient, and often beautifully decorated, storage system for the different types of oil the priest needed in order to fulfill his religious obligations.

The spiritual importance and symbolism of oil ranks highly—along with water, bread, and wine—in the religious lives of medieval Christians. The Bishop, usually on Holy Thursday, blessed the chrismatory oil, which was placed in the chrismatory’s three separate compartments, according to type. First, there was the oil of catechumens, which was used for the sacrament of baptism, or the conversion of new Christians. Second, the oil for anointing the sick, derived from olive oil or oil from another plant. Lastly, there was the holy chrism, which was a mixture of olive oil and balsam, and used for confirmation and ordination ceremonies.

Measuring 47 millimeters (or 1.85 inches) in height and 78 millimeters (or 3.07 inches) in width, this late medieval, three-chambered chrismatory was made of lead alloy. Shaped as a trefoil, or three-leaved plant, it is relatively unadorned and unembellished compared to other chrismatories found in medieval London. The different oils were placed in the three “leaves” of the trefoil. About half of all London churches had chrismatories of silver, and many of them sported intricate designs, such as engravings of evangelists or even royal coats of arms. The circular (suspension?) clasp allowed individuals to open the lid easily, and the loops underneath the lid allowed it to stay closed with a lock. The inside of the lid is etched with the letters “C” (for chrisma) on the lower-left side, “I” (for oleum Infirmorum, or “oil of the sick”) on the top, and “B” (oleum Catechumenorum, or “oil of catechumens,” used for baptism) on the lower-right side. These identifying letters helped the priest choose the oil needed for the right occasion. When the chrismatory was not in use it was usually stored away in the sacristy, where priestly vestments and other ecclesiastical items were kept locked away.

The chrismatory was both a holy and a practical object, and this one was likely one of many of its kind, as lead alloy was meant to last and cost less than chrismatories made of more expensive metals. This chrismatory may have been made from metals mined in Cornwall or Devon, and manufactured by one of the many metalworkers in London, although the provenance of this object, and where it was excavated in London, is unknown. 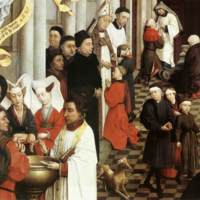 A Bishop is anointing a boy with the chrism, in a confirmation ceremony, while holding a gilded chrismatory. 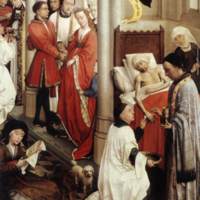 In this panel of the Seven Sacraments Altarpiece, the priest is holding a gilded chrismatory as he anoints the sick. 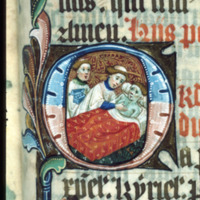 Detail of historiated initial 'O'(rdo) of a monk providing Extreme Unction to a man in bed. The monk in the background is holding a chrismatory.