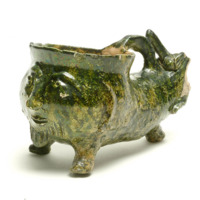 The drinking horn was a vessel from which wine or ale was drunk, just as its name suggests. Drinking horns have been traced back to several ancient cultures around Europe and Asia, including the empires of Greece, Rome, and Persia, as well as Scandinavian peoples such as the Vikings. They most probably originated from the rhyton (derived from the Greek word rhytos, which means “flowing”), which was a drinking vessel that was similar in style but usually had an animal carved at the end of the horn. These animals and other decorations, such as a grapevine, tended to symbolize or relate to the ancient Greek god of wine, Dionysus. Quite a few of these rhytons were made of precious metals (e.g. silver) and were most likely used by individuals of higher status and in the royal courts of these ancient civilizations.

The drinking horn was commonly crafted out of the horns of a goat, cow, or auroch, which was a species of cattle that is now extinct. Metal accessories were usually attached to the horn on the end (a stopper) and the rim, and sometimes there were fitted rings with legs welded to it to let the horn stand on its own. Besides animal horn, drinking horns were also made out of glass and ceramic. Romans were especially known for their glassblowing techniques, which can be seen in the Sutri drinking horn with its blue coloring and intricate decoration.

Aside from drinking, another use for the drinking horn was to convey ownership of land. The standard process through which the horn was given to the estate-owner or passed down is largely unknown, though it seems that there were traditions for doing just this at each individual estate. Some of the traditions date back to the rule of the Danish kings of England.

On display at the Museum of London is a broken drinking horn that is made out of Kingston-type ceramic. Dating from the fourteenth century, this drinking horn originated from the kilns of Kingston upon Thames, identified by the green glaze that was typical of Kingston-type wares. It measures 104 millimeters high (about 4.09 inches), 100 millimeters wide (about 3.94 inches), and 190 millimeters long (about 7.48 inches), showing that full drinking horns were made to hold a substantial amount of liquid. This drinking horn did not need separate fittings made to help it stand since it has three, small feet at its base. Its decoration is peculiar, with features of a human face carved into the front and an erect phallus attached to the back curve.

The use of Kingston-type ceramic means that drinking horns of this style were somewhat common during the medieval London (that is, around the thirteenth and fourteenth centuries), seeing as many common tablewares and pottery (both practical and decorative) from this period were also made of this material. Its material seems to indicate that drinking horns were not just for the celebratory feasts of the wealthy or nobility of this time, but possibly for more ordinary drinking practices as well. 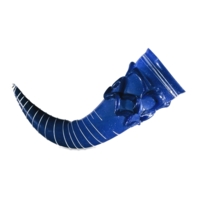 This blue-colored drinking horn, which possibly originated from Rome, is made out of glass. It is decorated with white circulating lines and lattice-work.