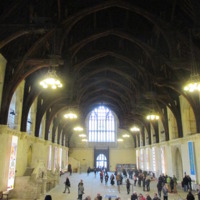 This is the interior of Westminster Hall as it stands today, the majority of which is from the late medieval period, aside from multiple roof renovations. Note the hammer-beam ceiling, the architectural feat of Hugh Herland, each of which is connected by an arch. The courts of law, coronation banquets, and a few depositions of kings have all been held in this hall.

Westminster Hall had a large presence in medieval London, both figuratively and literally. Throughout the entirety of the Middle Ages, Westminster Hall was a symbol of the grandeur and the power of the King. Located in the city of Westminster, west of the city of London and on the River Thames, it was built in 1097 and completed in 1099, on the order of William Rufus, son of William the Conqueror. Its present form, however, came into being around 1399, under the renovation of Richard II. It was completely remodeled, which took about six years to do so, and the majority of the Hall that stands today was constructed during this period of remodeling. Little remains of William Rufus’ Hall, which was built in the Romanesque style, though the walls and windows remain. Its large size, 73.2 by 20.7 meters, with two-meter thick stone walls, and its Gothic architecture are just a few of its defining hallmarks, but its true distinctive feature is the hammer-beam roof. Henry Yevele, Richard II’s chief mason, and Hugh Herland, a carpenter, redesigned the Hall’s roof, as roof architecture had vastly improved over the 300 years of the Hall’s existence. The roof timbers were entirely made from oak, which formed into thirteen, 660-ton arches, supporting the 176-ton lead roof. Only equally massive buttresses could support the massive hammer-beams and arches of Westminster Hall.

Westminster Hall served as the center of London’s legal system, hosting the Courts of the King’s Bench, Common Pleas, and Chancery. Common Pleas and King’s Bench were formed after the issuing of the Magna Carta, which helped create civil and criminal courts. The Chancery developed later in the fourteenth and fifteenth centuries, which was the court of equity, dealing with litigation of wills, land possession, and damages. Impeachment and state trials were held at the Hall, including the state trial of William Wallace, famed leader of Scottish resistance, and Sir Thomas More, advisor to Henry VIII. Even the deposition of Richard II took place in the Hall. Of course, there were smaller trials and lesser-known events that took place in the Hall, such as the various trials regarding land possessions and wills. However, Westminster Hall was not simply a place for trials to take place; it was also a venue for grand events, such as coronation banquets, feasts, and banquets for foreign leaders. The feasts at Westminster Hall began with William Rufus in 1099, and coronation banquets were held here for every monarch since the twelfth century.

Westminster Hall’s political significance to the people of medieval London remains apparent today. The structure itself was a symbol of the monarch’s power in the Middle Ages, which survived the Great Fire and into modern times. While the power of the monarch was not always consistently strong, as Richard II himself was deposed at Westminster Hall, its significance cannot be denied. It was also a symbol of the legal system, as it housed the Courts of Law, even if many medieval Londoners never stepped foot into the Hall itself. Finally, it was a place of celebration, as each and every coronation banquet brought a sense of excitement for the new monarch. Even though quite a few kings were not loved and adored by every Londoner, every celebration held at Westminster Hall was a spectacle of grandeur for the new king. Westminster Hall, a symbol of royal power, stood the test of time throughout a majority of the Middle Ages and served as the center of law, government, and even celebration. 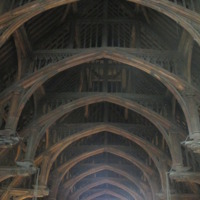 This is a close-up of the hammer-beam roof, constructed by Hugh Herland in the late fourteenth century. The beams and the roof itself weigh a collective 836 tons, with the timbers of the beams weighing 660 tons. Featured in this image are the arches that connect each hammer-beam.