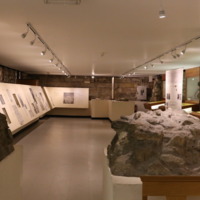 The medieval stone walls of St. Bride's crypt still stand today. The length of the wall along the left side of the crypt survives from the eleventh century, while the back and right-side wall are from the fifteenth century. Today, an exhibition detailing the history of St. Bride's has been constructed around the surviving medieval stone structures.

Often referred to as the phoenix of Fleet Street, St. Bride’s Church has been rebuilt and expanded repeatedly throughout history, and it still stands strong today. St. Bride’s is one of today’s distinctive surviving sites from medieval London, although only parts of the medieval structure still remain. The crypt is the only extant medieval part of the church, built c. 1300, only recently rediscovered when the church was excavated after World War II. A staircase in the northwest corner of the church allows individuals to access the crypt, which displays three rib-vaulted bays. The sarcophaguses found in the crypt are made of stone, some covered in tiles. The medieval remains of the crypt are not the earliest; there is also Roman pavement, dating back to c. 43 C.E. The church itself, however, was not constructed or designated as St. Bride’s Church until over four centuries later. The church name was dedicated to Saint Brigid or Bridget, called Bride, the Abbess of Kildare in Ireland, and a Celtic Christian saint. St. Brigid is commemorated for her work with the poor and the lepers, her generosity, and had multiple miracles attributed to her. As an Irish saint, she was revered second only to Saint Patrick. The use of an Irish saint in naming the church indicates that a Celtic-Christian community and its influence were strong in the area, especially in the sixth century.

St. Bride’s was built outside the Roman Londinium, and on the eastern outskirts of the seventh- to ninth-century settlement of Saxon Lundenwic. Today this location is on the north bank of the Thames River in the East End, on Fleet Street. The sixth-century church was constructed of stone; a small, basic building that consisted of a narrow entry and a basilica, or an oblong hall. The church layout is conforms to the typical Celtic style, with its narrow entry designed to shield the holiness inside the church from outside interference. In 1135, fire destroyed the building, and led to the revamping and reconstruction of St. Bride’s that better accommodated the liturgical practices at the time. The new church in the twelfth century featured an ornate, detached tower housing one of London’s four curfew bells, built near the southwest corner, and boasting tiled floors and corner columns. The east end of the church was extended, lengthening the chancel and adding an apse, in keeping with the Christian church’s practice of emphasizing the mystery of the mass by placing the apse further away from the congregation. Documentary evidence shows that by 1188, the church cemetery was established. In the early thirteenth century, stone arches were added as an entrance to the new north aisle alongside the church. A Lady Chapel was built on the north side of the chancel. In the fifteenth century, St. Bride’s was expanded further in order to hold seven altars. The base of the church measured 97 feet long and 28 feet and 3 inches wide.

St. Bride’s became a Fleet Street landmark, and functioned as a parish church. It was a place for local Christians to come together as a community and worship. Parishioners attended St. Bride’s to have their children christened, experience the sacrament of matrimony, attend mass, and lay the dead to rest. The church also served political needs. In the eleventh century, Edward the Confessor reigned over England, and there was a period of church dedication in London. Thus the church was intended not only as a monument to people’s religious devotion, but also the city’s prosperity and connection to the Crown. In 1205, the Curia Regis, the royal court of the realm, was first held at St. Bride’s. Five years later, King John held his parliament in the church. It was common to find monarchs, statesmen, judges, and all manner of influential men frequenting the church for their political and religious needs. Additionally, in 1501 Wynkyn de Worde set up his printing press in the St. Bride’s churchyard, the first printing press in England with moveable type, which began the enduring relationship between St. Bride’s and the world of print, strengthened, no doubt, by the high literacy rate of the clergy. As a medieval church, St. Bride’s was a hub of community activity, bringing the people of London together. 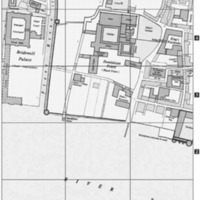 This 1520 map shows the location of St. Bride's Church on the North Bank of the Thames River, just off the edge of the Fleet River. The church is circled in red. The church was a gathering place not only for the parish members to worship, but also for political and government gatherings, such as the Curia Regis, the main court of the realm. 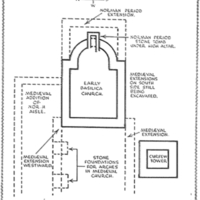 This sketch illustrates the layout of St. Bride's Church from the saxon and medieval periods. The perspective is aerial, and shows the extensions that were added to the church over time with dotted lines and arrows. 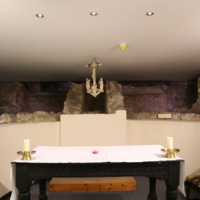 The stone wall and structures of the crypt shown here are from the eleventh and twelfth centuries. The recessed area, lit up by purple lights in today's viewing, shows Roman pavement from c. 43, which was covered by the saxon and medieval church. Today, visitors can view the medieval stone, but the area is set up with an altar to resemble a church chancel.