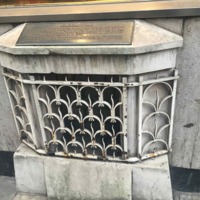 Cannon Street is a road in the central city of London, home to the medieval London Stone. The London Stone is a set into an alcove behind a grille on Cannon Street. The street was known as Candelewrithstret in 1183. The name was shortened over sixty times, because of the cockney dialect. Some of the other names it had were Candlewick Street, Canwick Street, Cannik Street, and Cannon Street. The Street itself is a half-mile long. Eventually, the name Cannon Street was settled on in the seventeenth century. Initially, the area around Cannon Street was home to candle-makers. Candelewrithstret got its name from the Middle English candelwricht, which means candle-wright or chandler, indicating the types of craftspeople who lived and worked on this street and around the area. A chandler was a person who specialized in wax and candles. Candles were made from tallow, which is rendered from beef or mutton fat, and, as a result, the smell was quite pungent. There were many complaints from people around the city about the smells emanating from Candelewrithstret. The chandlers eventually moved their trade to outside the city walls.

Cannon street originally ran from Watling Street and almost to London Bridge, and is the London terminus of the South Eastern railway. It was also the earliest highway through the city. The highway was first mentioned in 1276.  It has been suggested that Cannon Street Station is the site of the original fortress of the first Roman city of London. A Roman bath has been discovered on Cannon Street, as well as two Roman pavements, one of them tessellated. During the Middle Ages, a passerby could walk down Candlewick Street to see the London Stone. The London Stone’s origin and purpose is still unknown. It stood near St. Swithin’s Church on the north side of the street. There were many legends about the stone, prompting many people to take the journey to see it.

The London Stone is located at 111 Cannon Street, and is the only part of the street that dates to the Middle Ages. The stone itself is an irregular block of oolitic limestone, and is 21 x 17 x 12 inches. The stone used to be a much larger object that stood on the street for many centuries, but after a fire, this block of stone was all that had survived. The London Stone is the last remnant of a structure that once stood there. The origin of the stone is still unclear, some saying it originated in the Roman period and some saying it was an entrance to a large public administrative building on the water. The London Stone was a very well known monument in medieval London. In 1450, Jack Cade, the leader of a rebellion against Henry VI, came into the city with his troops and stuck his sword in the London Stone. Once there, he proclaimed himself the “Lord of this City.” Many medieval Londoners adopted the phrase “At London Stone” if they lived close by.

Currently, the stone stands on the north side of Cannon Street, surrounded by an iron grille.  It is protected by glass, but one can clearly still see the stone intact. The area around it is the financial district, and it is directly across from Cannon Street Station. The function of the stone is decorative now, a symbol for the medieval site that once stood on Cannon Street.

During the medieval period Cannon Street was regarded as the heart of the city of London. The London Stone was a piece of the street that drew many people in. In the post-medieval period, people were still guessing as to what the stone meant and symbolized. The saying “So long as the Stone of Brutus is safe, so long will London flourish” was coined in 1862, which indicates the significance of the stone to London. 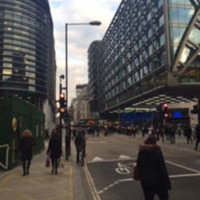 Cannon Street is located in central London. The street used to be known as Candelewrithstret in 1183. The street is half a mile long. 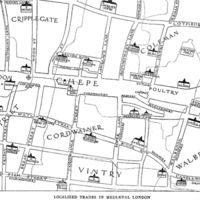 Here is a map showing Candlewick Street, which is the original name of Cannon Street, and how it would have appeared in the Middle Ages.