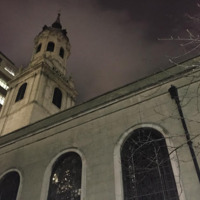 St. Magnus the Martyr church on Thames Street, which was a popular road for trade and commerce.  In the early medieval period it was called Stockfishmonger Row. Thames Street was believed to have been home to Geoffrey Chaucer, and later was described in the diaries of Samuel Pepys.

Thames Street takes its name from the famous river, the etymology of which is debated among scholars, but most believe it is a variant of the Sanskrit tamasa, which roughly translates to “dark water,” and was a word later adopted by the Celts.  It is also believed that the “h” in Thames was added sometime between 1300 and 1600, as earlier evidence, such as the Magna Carta (1215) in a clause dealing with fishing regulations, referred to the Thames as Tamisia.  Before it was called Thames Street, locals referred to it as “Stockfishmonger’s Row.”

Much of the street’s medieval history and archaeology has been obscured by two major disasters.  First, the Great Fire of London in 1666 swept through almost all of Upper and Lower Thames Street, which effectively scorched the area and left behind much devastation.  Second, the Luftwaffe bombing of London during World War II resulted in further damage to the street’s history.  Though these two events demolished much of Thames Street, it has yielded more Roman ruins and remains than almost any other excavation site in London.

Thames Street may have also been the location of Geoffrey Chaucer’s residence.  He is believed to have lived at or near 177 Upper Thames Street, though it is a point of contention among many Chaucer experts.  The street was also frequented by Samuel Pepys, who mentions it more than twenty times in his diaries, which remains one of the most detailed accounts of Thames Street that still exists today.  Though Pepys was a seventeenth-century diarist, his various accounts of Thames Street are one of the few records that we have of the street before the Fire of 1666 destroyed it.

Archeological excavations, and accounts from merchants, reveal that there were many wharfs and docks along the street, which made it busy with foot traffic.  The proximity of Billingsgate Wharf and Castle Baynard Wharf to Lower Thames Street means that the street benefited from London’s prominence as a trade hub, and was a popular area for selling fish, in addition to the goods offloaded from the wharf.  Merchants from overseas were frequent visitors; they described it as one of the largest markets in all of London. Dominic Mancini’s first-hand account of London during the reign of Richard III is invaluable for information on medieval Thames Street. He described the street as one of the busiest in the city, characterized by its many cranes, warehouses, and markets of remarkable size.  Mancini also saw trade of many goods, including wine, wax, gold, silk, dye stuffs, minerals, threads, grain, and fish.  In terms of dimensions and physical characteristics, he claimed it was a paved road which stretched westward from the Tower, and split into three roads, each of which sold different categories of merchandise.

Among Thames Street’s most notable buildings are St Magnus the Martyr Church, the old custom-house, and Old Swan Tavern.  The presence of these buildings illustrates the importance of the parish church (and religion in the lives of Londoners), the need for commercial oversight, and a demand for food and lodging.  These buildings, along with sites such as the steelyard and a weigh station for imports, show that Thames Street was a well-known and well-traveled road, which served as a major trade center in London. 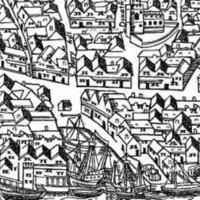 A map of London most likely extracted from a copperplate for printing dated to around 1560.  This image depicts all of Lower Thames Street and Most of Upper Thames Street.