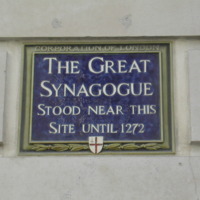 The Old Jewry was a Jewish ghetto in twelfth and thirteenth centuries in London. Its main street, Jewry Street (now known as Old Jewry Street), is approximately 20 feet wide, 476 feet long, runs north to south from Gresham Street to Poultry Street, and is located within the EC2 postcode area. Old Jewry’s postcode district includes Moorgate, Barbican (the location of the Museum of London’s main exhibitions) and Queen Victoria Street. It also includes the eastern corner of the City of London–north of the River Thames–from St Paul's Cathedral.

Although it is no longer the exclusively Jewish-populated ghetto and financial sector it once was, the streets surrounding Old Jewry are still home to many of London’s largest financial corporations, such as the Bank of England, Lloyds of London, and the Reserve Bank of Australia.

Within old Jewry Street once stood the Great Synagogue, or the center of religious life for the Jewish population of medieval London. Following the great difficulties experienced by the Jews in England in the thirteenth century, the Great Synagogue was closed in 1272. Shortly after its closure, Edward I’s Edict of Expulsion (1290) resulted in the expulsion of Jews from England until their informal readmission in the mid-seventeenth century.

In order to better understand the historical significance of the Jewry one must first recognize the circumstances under which Jews migrated to London, the rules and regulations to which they were bound under the English crown, their role in the development of London as a financial center, and the reasons for their expulsion.

Beginning in the late eleventh century, William I encouraged Jews to migrate to London as part of a policy of stimulating commercial and financial development– a policy that proved to be instrumental to the restoration of London’s economic infrastructure following the devastating Norman Conquest of 1066.

Thus, with their arrival, the Jews brought with them money that they lent to the King at interest when the tax and feudal dues from his counties and wards were not duly collected. For their services, the Jews of London were given rights proclaimed in the Statutum de judaismo issued under Henry I. Under this ‘Jewish Charter’ the Jewish population of London was guaranteed, according to Brown and McCartney, “liberty of movement through out the country, relief from ordinary tolls, protection from misuse, free recourse to royal justice and responsibility to no other, permission to retain land pledged as security, and special provision to ensure fair trial.”

Although succeeding rulers confirmed the rights established under the charter, English contempt for the Jewish population grew with the passage of time. English disdain for Jews reached its peak in the thirteenth century as a result of numerous financial disagreements and criminal allegations, most of which were false and founded on jealousy and an irrational fear of the foreign and unknown. By 1290 the persecution of England's Jews turned into bloodshed: Jews were massacred at Londonand Yorkpogroms, and those who were not killed were stripped of their rights granted to them by charters.

Although trade and the need for capital were growing under the reign of Edward I, who was in debt from the moment he began his reign until his death in 1307, the people of England refused to accept the presence of a Jewish community in their kingdom.

Given the historical context of the medieval Jewish population, it becomes evident that the ghetto of Old Jewry, like all of the ghettoes in the history of mankind, formed as a result of social, legal, and economic pressures. The anti-Semitic sentiment within the Christian population of London encouraged Jews in London to take advantage of the rights granted unto them under the Statutum de judaismo. In effect, the ghetto of Old Jewry was formed by–and as a safe haven for–Jewish financiers and their families. Nevertheless, the Jewish community’s seclusion within the streets of Old Jewry only worsened their obscurity– a factor that contributed to the English disdain for Jews until its breaking point.