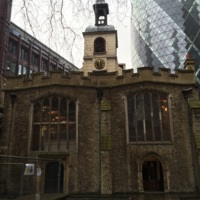 St Helen’s Bishopsgate is built in the Gothic style and contains a nunnery church and a parish church side by side. The nun’s nave occupies the northern church, while the parish nave occupies the southern church. A fourteenth-century arcade, which was likely screened prior to the Dissolution, divides the two churches with four bays towards the west, and two arches towards the east. Most of the outer structure is from the thirteenth century; there are, however, sections from the twelfth, fourteenth, fifteenth, and sixteenth centuries. The architecture employs reigate stone rubble for the flintwork. The west windows have depressed arches and were constructed in 1475, but the glass is from the twentieth century. The church also still owns thirteen fifteenth-century stalls from the nuns’ choir. During the middle ages, the cloister, chapter house, dorter sub vault, and other sections of the convent were attached to the nun’s church; unfortunately, these sections have been either destroyed or buried. After the church was damaged by terrorist bombs in the early 1990s, architect Quinlan Terry controversially re-ordered the church, so the interior differs from the medieval construction.

In the early thirteenth century, William, son of William the goldsmith, established the Benedictine convent at St Helen’s Bishopsgate. The parish church was built by 1140, or possibly earlier, and had been granted to the deans and canons of St Paul’s. The parish church was dedicated to St Helena, Roman Emperor Constantine’s mother, who had supposedly uncovered the remnants of the cross, or the True Cross, upon which Jesus was crucified.  In the middle ages, St Helen’s Bishopsgate was located between Bishopsgate Street and St Marie Street. In 1285, King Edward I presented a piece of the True Cross to the nuns, which indicates the importance of the convent and its connection to St Helena. Throughout the middle ages, patrons, such as John de Etton in 1346, bequeathed substantial property to St Helen’s for chantries. This property must not have been sufficient to sustain the nunnery, for it experienced great financial difficulty in 1350.

In 1379, St Helen’s Bishopsgate was made up of a prioress and eleven nuns, and similarly, in 1539, the convent was made up of a prioress and fourteen nuns, indicating a sustained number of nuns throughout the centuries. According to a study of six London nunneries from 1370 to 1540, a substantial number of the nuns were born to London citizens. In addition, beginning in the late thirteenth century, young women boarded at the nunnery were educated there. Among the nuns, there were occasional disagreements and transgressions. For example, in 1385, a nun named Joan Heyronne, suffering from gout, convinced the pope to provide her with a yearly ten pound allowance to support her. Her prioress, Constance, responded to the news by locking Joan in her room with minimal food until the dean and chapter of St Paul’s intervened. Around 1432, a prioress was also reprimanded for owning too many dogs, while in 1385, nuns were reprimanded for kissing secular persons. Judging from this documentary evidence, the level of devotion among the nuns to their vows of chastity, poverty, and obedience likely waxed and waned.

Today, St Helen’s Bishopsgate is still home to a number of tombs and funerary monuments from medieval patrons. In 1535, 85 percent of St Helen’s income came from the city of London, which illustrates the importance of these wealthy parishioners. Funerary monuments of prestigious patrons were often placed near the altar of a church in order to be closest to the east. In this fashion, the tombs of Sir John Crosby of Crosby Hall, who died in 1476, and that of his wife were located near the altar in the east end of the church. Similarly, the brasses of Thomas Wylliams, who died in 1495, and his wife Margaret were placed in one of the chapels. These funerary monuments indicate that St Helen’s had quite a number of prestigious patrons—such as merchants, mayors, and guild members—than most nunneries during the middle ages.

Although much of St Helen’s Bishopsgate remains as it was in the medieval period, the Dissolution did leave its impact on the structure. The nuns submitted the convent to the Crown on November 25, 1538. Then, the Leathersellers transformed the dormitory into a sixteenth century hall, but they did leave the vaults intact. In addition, the Leathersellers also made the nuns’ chapter house into a company parlor. Unlike other parish churches, the Anglican Church adapted the church for its own use, which led to much of the structure’s preservation. In fact, St Helen’s Bishopsgate continues to this day to be an active place of worship.

On this map of the east side of medieval London in 1270, St Helen’s Bishopsgate is located between Cornhulle and the City Wall. 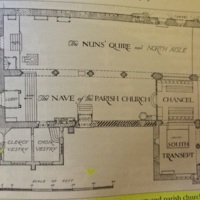 This plan of St Helen's Bishopsgate illustrates the division between the two naves in the interior of the building. In addition, the dark diagonal lines indicate where sections of the twelfth-century church still exist. The north wall also includes a staircase, which would have connected the cloister with the church for daily and nightly mass. 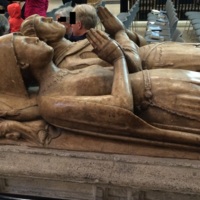