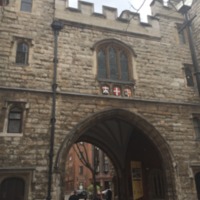 The Order of the Hospital of St John of Jerusalem was set up in Clerkenwell in 1144. The Hospital of St John of Jerusalem existed in 1099 when the first Crusaders captured Jerusalem. The Order had a military role and was created to defend the Holy Land, which had been captured by crusaders. This Clerkenwell Priory became the only priory the Order could have in England, and it was their primary location. The order was known as the Knights of St John, or the “Knights Hospitallers.” They took vows of poverty, chastity, and obedience. The Pope recognized them as a new religious order and the Hospitallers were known for taking care of the “blessed sick poor.” The Clerkenwell Priory was a place of large-scale hospitality. The Order was above the nobility and answered directly to the Pope. Kings Henry VII and Henry VIII were called the “Protectors of the Order” and maintained a close relationship with the Hospitallers. The Priory also had power internationally and became a center for diplomacy and business.

In 1381, a group led by Thomas Farndon set fire to Clerkenwell Priory, as well as many houses around it, and beheaded several people whiling stealing many goods. The Priory was attacked because of its close ties with the monarchy. It was also attacked because the religious order, like other religious orders in England, owned land and had disgruntled tenants. The Hospitallers were not popular during the Peasants’ Revolt of 1381.  The fire had destroyed the Priory, though it was rebuilt in 1504. The new Priory resembled a palace and was a landmark.

Henry VIII dissolved the Order in 1540 during the Dissolution of the Monasteries. Henry left the Priory to his daughter, Mary, who used the Priory as a palace. Lord Protector Somerset took down the Church nave and bell-tower and used the stone for his new mansion, though he left the large choir and crypt intact.

Archaeological evidence has shown that this priory was more than a religious house and was a unique monastery. It included an extravagant church, a cemetery, residential spaces, and the type of courts usually built for the most affluent nobles. The first three bays of the crypt were built in the 1140s with rounded arches, which are still existent today, and likely used as a chapel or charterhouse. At the end of the twelfth century, the crypt was expanded, and archeological evidence suggests that the building was of high-quality because of the excavated fragments found. The crypt remained even after the Dissolution of Hospitallers in 1540. 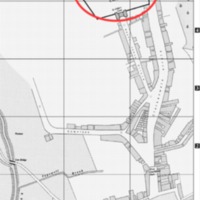 This is a map of Clerkenwell Priory in 1520. The priory is circled in red. 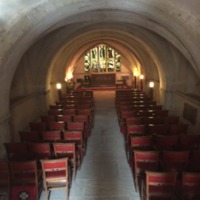 This image is of the crypt, located underneath the church. It is one of London's few remaining Norman structures.