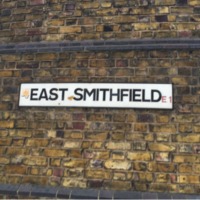 The medieval cemetery of East Smithfield is below the ground, underneath this placard.

One of the two emergency burial grounds in London during the time of the Black Death, East Smithfield is a medieval cemetery that reveals much of London’s personal history.  East Smithfield was built in either late 1348 or early 1349. (The other cemetery was called West Smithfield.) The primary use for this cemetery was to bury the victims of the plague that hit medieval London in the mid-fourteenth century.  All of the bodies excavated from this “plague pit” contained exclusively the people who perished in London during the Black Death.

The Bubonic Plague hit London in 1348 and ravaged the city until the spring of 1340. (Other outbreaks occurred throughout the following years, but this was the main surge.)   The epidemic reached London through the port of Melcombe-Regis in Dorset.  The disease claimed the lives of 30 to 50 percent of Londoners.  London was the largest urban center in medieval England and northern Europe; as such, the plague killed a great number of people particularly in London because there were many more people living closer together than people living in rural farming areas or even in smaller towns.

The cemetery was named “East Smithfield” after the area south of the Aldgate, also called East Smithfield.  The etymology of the original word “Smithfield” originates from the word smoothfield: literally, a smooth field or plot of land.  In 1350, the cemetery became a part of the Cistercian abbey of St. Mary Graces, although it was rarely used after 1349.  Located to the east of the Tower of London, several sources claim the land was called “no man’s land.”  Sources also referred to the burial ground as the Royal Mint cemetery.

The pre-existing London churches did not possess enough land for the great number of people who died during the plague.  In preparation, several people helped obtain land to be used for the cemetery.  In 1348, Ralph Startford, the Bishop of London, dedicated land to be put aside for the victims of pestilence.  John Carey, a royal servant of King Edward III, established the land under the king’s orders. Similarly, Sir Walter Manny, a personal friend to the king,  established West Smithfield under similar orders.  The establishment of these cemeteries signified the great extent to which the Crown could be involved in taking drastic public health measures in London during the Middle Ages.

In East Smithfield, an estimated 2,400 Londoners were laid to rest.  At the height of the plague, two hundred people were buried per day.  Archaeologists from the Museum of London discovered the details of the cemetery and the exact number of skeletons when the site was excavated in the 1980s. The cemetery was approximately two hectares in size, split into two clusters of burials on the western and eastern side.  A total of 558 burials were excavated from the western half and 192 individual skeletal remains were recovered from the eastern half. Archaeologists working on this site have revealed the demographic profile to be approximately 30 percent subadults (individuals who have not yet reached puberty) and 70 percent adults.  The majority of the subadults died over the age of five, while the majority of the adults died under the age of thirty-five.  Knowing the age range of plague victims is important because it indicates the “death curve” during a catastrophe such as the Black Death, as most people who came in contact with the disease were likely to die, regardless of age or health.

According to Christian practice, the bodies in the cemetery were oriented from east-to-west.  Some of the excavated bodies were covered in charcoal; archaeologists believe that medieval people used charcoal to absorb the fluids discharged during putrefaction.  Along with the bodies, many trinkets and coins were also found, items that were of personal and monetary value to the dead. The cemetery contains a mixture of individual graves and mass graves. Of the remains recovered in the site, 402 individuals were buried in mass graves; some of the graves were piled five bodies deep. Historians believe that, as the effects of the plague spread, people died at a faster rate, and as a result burials were conducted faster and with less care, which may explain why there were so many mass graves during the period of the Black Death.

Scientists have conducted many tests and exams on the remains of the bones excavated in the cemetery, including vertebral pathology and dental pathology.  The bacterium called Yersinia pestis was found in the remains, the same bacterium that some historians claim caused the Black Plague.  Skeletal remains and evidence of burial practices found in cemeteries such as East Smithfield have helped scientists, archaeologists, and historians better understand the Plague’s causes and its effect on social mores in medieval London. 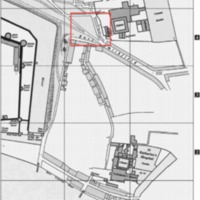 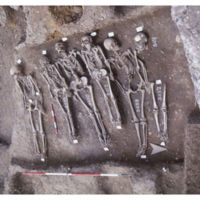 These are skeletons excavated from the East Smithfield site by archaeologists from the Museum of London.  Many of the remains were found in mass graves, illustrating how desperate and dire the Black Death was for medieval Londoners.