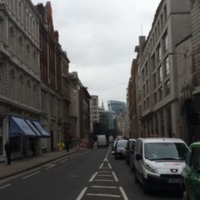 Newgate Street is a street in the western section of the City of London. As the name suggests, it was the site of a gate that was part of the old London Wall. The Romans built the first fortifications around 200 C.E., and Newgate was one of the original gatehouses for this fortification. Although the original Roman settlement was abandoned, many of the structures remained, and when London was eventually reoccupied, the city continued to follow the Roman design. As time progressed, the street from the gatehouse also came to be known as Newgate Street, and became an important fixture within the City of London.

First and foremost, the Gate was a double-archway entrance into the city, containing a portcullis to seal off the entrance when needed. Moreover, Newgate (like the other gates) was intended to be a focal point of defense for the City of London and is one of the seven great gates mentioned in William Fitz Stephen’s description of Norman London in the late twelfth century. It boasts two large towers, from which watchmen were able to survey the surrounding area. Second, the gate served as a prison in medieval London, and during the tenure of Mayor Dick Whittington in the fourteenth century, it was rebuilt. The area in and around Newgate, and the street after which it took its name, is still closely tied with the criminal justice system, as the Central Criminal Court (or “Old Bailey”) stands partially on the site of the old Newgate Gaol.

As one walks down the street, one can find that the first, permanent site of a friary within the City of London was, in fact, on Newgate Street. In 1239, the Franciscans (or Grey Friars) established their first chapel on this street. By 1337, the Grey Friars had constructed a magnificent church on the street that boasted many large marble columns as well as the burial sites of many prominent figures, such as Queen Margaret (wife of Edward I). Although the monastery was eventually dissolved by Henry VIII and destroyed during the Great Fire of 1666, one can still see a memorial plaque commemorating the ruins of this historic site.

The entirety of the street, especially in the Middle Ages, is relatively short. It stretches between Cheapside and the area around St. Paul’s Cathedral in the East to the site of the former gate and the Holborn Viaduct in the west. From the Roman to the medieval period, the road coming out of the gate extended from the west of London to the city of Silchester in Hampshire, thus linking London with other parts of England. 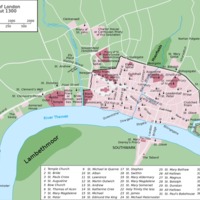 Newgate and Newgate Street can be seen in the western section.