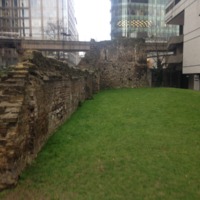 The London Wall refers to the old Roman city walls built in 200 C.E. encircling what was then called Londinium. Under the command of the Roman emperor Severus (193-211 C.E.), the Romans built the city walls to defend Londinium against any attacks by native Britons. Londinium’s Wall incorporated two walls of a pre-existing fort. It extended for 3.4 kilometers (about two miles) from what is today Blackfriars in the west to the Tower of London in the east. The walls were built of ragstone, which is a hard sedimentary rock that can be broken into thick portions.  Ragstone was extracted from Maidstone, in Kent, and brought to London on the Thames by boat. On the external surface at ground level, chamfered plinth, a symmetrical cut base made of brown sandstone, was laid 2.7 millimeters thick. On the internal surface, three courses of Roman, flat clay tiles were placed level with the external base. Both faces of the wall consisted of more than a million square blocks of ragstone. The core of the wall was comprised of ragstone rubble surrounded by lime mortar. The original height of the wall was about 14 feet, but additions were made during the Middle Ages for further protection. In front of the wall, a three- to five-meter wide, and two-meter long, defensive ditch was constructed to provide additional security. In 350 C.E., approximately 22 semi-circular towers were constructed in the eastern section of the city, which were prime locations for platforms on which catapult machines were mounted. The old ditch was also rebuilt into a new, wider ditch dug farther away from the wall. Over the next few centuries, London’s walls did not change drastically. The twelfth-century writer William Fitzstephen described the Wall during the reign of Henry II to be fortified with towers at intervals, consisting of “seven double gates.”

Main gates were placed into the wall for thoroughfares that led out of town. Little is known of the Roman gates, but as they fell into disrepair, they were replaced with ones built in the Middle Ages. The main gates were Aldgate, Bishopsgate, Newgate, Aldersgate, Cripplegate, and Ludgate. Smaller gates for pedestrians were also built, but were not considered main gates. One of these pedestrian gates, Moorgate, was demolished in 1415 and replaced by a larger gate, making it the seventh main gate.  Preserving the walls and gates held enormous importance to medieval Londoners. At each gate, a toll was paid and a rent was charged for leasing out the gatehouses and towers to hermits, anchorites, and city officials. Each London citizen had to pay “murage,” or a tax for the upkeep of the walls.

The walls were vital to the citizens of medieval London. The main purpose of the city wall was for protection against attacks, such as those from the Danes and other Viking invaders. From the seventh to the ninth centuries, London was located outside the original Roman city walls. By the beginning of the ninth century, Londoners moved back into the old Roman town because of the Viking raids. The addition of the circular towers to the walls allowed medieval archers to fire arrows on approaching enemies. Known as “trained bands,” men, young and old, held regular archery practices in case of an attack. A curfew was also set after the bells tolled, when the City gates closed for the night. Guards posted at each gate allowed citizens to rest comfortably. After Alfred the Great’s invasion of 886, the wall never surrendered to force. It also stopped the Great Fire of 1666 from spreading outside the walls. Not only did the wall guarantee safety, but also gave the city its boundaries, and its presence marks the birthplace of the City of London.

During the medieval era, there were minor realignments of the wall near Blackfriars, but otherwise it remained unchanged over many centuries. Under the reign of the Plantagenets, the overall construction and maintenance of the wall improved and its height increased. Around the seventeenth and eighteenth centuries, the wall was no longer considered necessary for defense, and much of it was demolished. Sections of the wall still survive today and are scattered throughout the city, reminding Londoners of the beginnings of their great city. 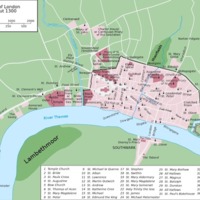 The perimeter of the London Wall is indicated by the black border, encircling the City of London. 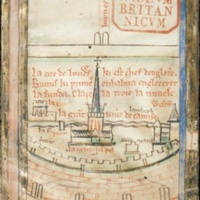 Thirteenth-century detailed drawing of the City of London, as a part of the itinerary to Jerusalem. You can see the Wall in the foreground of the picture.