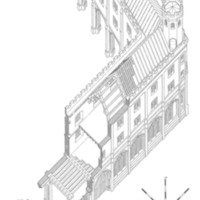 Reconstruction of what the market arcade and granary probably looked like in the middle ages. 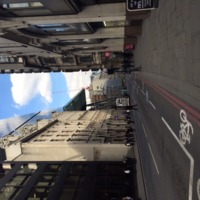 Leadenhall Market is situated near the Financial District of London between Gracechurch Street, Frenchchurch Street, and Cullum Street. It is located at the site of Cornhill, and in the center of what used to be the original Roman town. During the Roman period, it served as both a marketplace and a center of civic administration, and the eastern portion of the Roman forum and basilica were established there. The area was abandoned when the Anglo-Saxons left the Roman town, but it was gradually repopulated when they returned around 866.

Leadenhall Market was originally a lead-roofed manor house located within London’s Lime Street Ward. It is from its original lead roof that it derives its name. There is no way to know when the manor was originally built, but by 1309 it had come into the possession of Sir Hugh Neville. Neville opened up the grounds of the manor to his tenants so that they could use it as a market place. It became a popular meeting place for poulterers and cheesemongers, but it was still a fairly small market. Eventually the manor came into the possession of Lord Mayor Richard Whittington, and in 1411 he gifted it to the city. In 1440, Lord Mayor Simon Eyre renovated the manor hall, and it served as a market, granary, grammar school, and chapel.

The original Leadenhall Market was designed by John Croxton in 1440, and completed in 1449. He expanded the original hall into a large rectangular quadrangle, two stories high, complete with a public granary, massive storage rooms, and a small side chapel. The building included battlements and turrets, which suggests that the market could have been fortified, probably as a precaution in the event of a food shortage or some other kind of social unrest. Previously, the market had been set up in the narrow streets surrounding the building. Following completion, all trade occurred inside the arcade.

By 1600, the market included sellers of poultry, grain, eggs, butter, cheese, foodstuffs, wool, leather, and cutlery. It was the most important market in medieval and early modern London, especially for meat and poultry. The market would have been very similar to markets today: noisy, full of activity, and packed with people. However, unlike markets today, Leadenhall was also a dirty, smelly, and disgusting place where butchers cut and sold all kinds of meat. Before it was forbidden, they would have slaughtered and cleaned the meat there as well.

Leadenhall Market was an important and integral part of the surrounding community. The inclusion of a school and chapel suggests that it was much more than simply a space to buy and sell goods. During the reigns of the Tudor and Stuart Monarchs, it was used as a venue for shows and festivals. Leadenhall Market was relatively unscathed by the Great Fire of 1666, but some minor repairs did take place following the fire.

In 1881, the city had the original building torn down, and commissioned Sir Horace Jones to design and build the Leadenhall Market that stands today. All that remains today is a fragment of a wall encased between Victorian buildings, a series of chalk foundations, and 177 loose moldered stones that were found in later walls and foundations of other buildings. Using only these remnants of the original building, along with surviving maps and plans, archaeologists were able to reconstruct what the original building looked like. Leadenhall Street, which runs to the north of the market, still retains its original medieval layout. 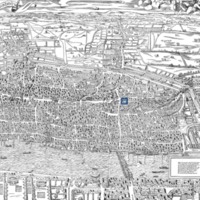 The Agas map with Leadenhall Market marked in blue. 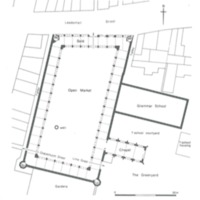