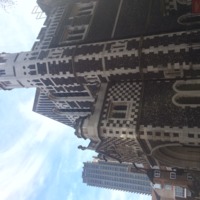 St. Bartholomew the Great is a church located in West Smithfield.  It was founded by Rahere, a courtier of Henry I, in 1123.  While in Rome, Rahere became ill with malarial fever, as was common at the time, and prayed that if he survived, he would build a hospital for the poor people of London.  His prayers were answered and Rahere recovered.  Upon his journey home, Rahere had a vision in which St. Bartholomew, one of Jesus’ apostles, appeared to him and told him of a place outside the walls of London called Smithfield where, in his name, Rahere should build a church. Rahere received the funds and built both a hospital and a church.

The site chosen for the church was the king’s market.  In the time of the Romans, Smithfield was the site of a cemetery outside the walls of London.  It was given its name because of the smoothness of the field.  The funds for the church were given in a short amount of time and it is said that Rahere was assisted by the monk, Alfune, in planning the architecture and style of the building.  The central tower still holds the twelfth-century Priory seal with a small tower on each end of the exterior.  The second Prior, Thomas of St. Osyth, included the transepts and bays of the nave, which appear in the eastern part of the church.

After Henry VIII’s break with the Catholic Church, St. Bartholomew’s was dissolved and the Priory was surrendered on the 25th of October 1539.  The site of the priory and the buildings on it were sold to Sir Richard Rich in 1546.  Because many churches were taken over by existing congregations, many architectural features of the church have been altered in some way since its founding; many, however, still retain their original medieval features.  The North aisle retains makeshift enclosures typical of the time, as well as the thirteenth-century nave of the West front that is incorporated into a timber-framed gatehouse.  Upon entering the church, one may see the contrast between the Norman work of the twelfth century and what succeeded it in the thirteenth juxtaposed in the doorway.

The Gothic style of architecture, introduced at the crossing of St. Bartholomew, has the earliest pointed arches in London, dating back to about 1145.  In the fourteenth century, reigate stone, which can be easily carved and became the preferred material, was being used with flint in alternating bands in the church.  The canopy tomb also became very popular in the late Middle Ages and can be seen used on the monument built for Rahere.  Some remaining features of the original church are the clerestory— which is a two-light, plate-traceried window made in circa 1230—as well as the outline of the thirteenth-century aisle vault that lays on top of the twelfth-century arcade and gallery.   Near the bay is the north transept that contains a porch and an asymmetrical octagonal turret.  The choir, which is four bays long and has cylindrical piers and unmoulded arches, also contains four thin sub-arches in the gallery opening, with one relieving arch with billet decorations.  The ambulatory, which is the present day Chapel of the Knight’s Bachelor, retains the twelfth-century bays, and is north of the Lady Chapel entrance, which contains detached shafts to form the seats, blind niches from the thirteenth century, and north and south windows of the fourteenth century.

In the medieval period, religion was a central part of daily life, making London’s buildings of worship the largest structures in the city.  The church, a place of worship, held great influence in medieval London as every Londoner had an association and obligation to their parish, and thus took their worship very seriously.  Such evidence comes from the elaborate architecture and work that went into each church, and the amount of churches within the city.  Constant updates and renovations were made to this priory’s church as time passed, with many priors sponsoring or overseeing additions the church that used the latest innovations in church architecture.  After the Dissolution, more renovations were made, keeping some of the original architectural features of the building. 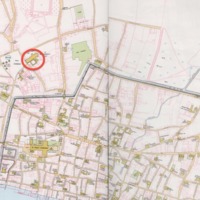 St. Bartholomew the Great Church is located in West Smithfield (located on the left top-hand side of the map). It is marked with a red circle. 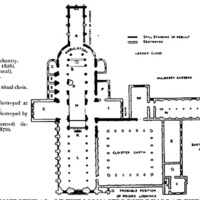 A floor plan of St. Bartholomew the Great Church that includes all the aspects of the original church. 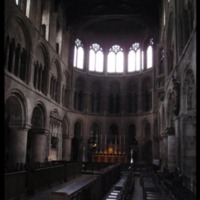 The choir is four bays long and has cylindrical piers and unmoulded arches, typical of the twelfth century.