St. Olave Hart Street Church, located at the corner of Hart Street and Seething Lane in Tower Ward, has served as a place of Christian worship for Londoners since the late eleventh century. It is one of five London churches dedicated to Olaf II Haraldsson, the King of Norway from 1015 to 1028. Before his coronation, Olaf fought alongside Ethelred the Unready, the Anglo-Saxon king, to overthrow Danish rule in London at the 1014 Battle of London Bridge. Olaf died fifteen years after the battle, and was canonized as a saint.

Based on the foundation dates of the other London parishes with the name St. Olave’s (e.g. Tooley Street, Old Jewry), the original St. Olave Hart Street was probably built between 1055-1060. However, the earliest confirmed reference occurs in a cartulary from 1109. In it, Queen Maud, the wife of King Henry I, disposed of land in the parish church of ‘St. Olave’s by the Tower,’ likely a timber structure at the time. Little is known about this wooden structure, other than that its construction was likely simple and typical for the time period. A stone church with an expanded nave replaced it in the late twelfth or early thirteenth century. In 1450, Richard and Robert Cely erected the third church on the site. This church was also made of stone and survived for nearly 500 years, even escaping the Great Fire of London in 1666. The flames came within 100 yards of the building, but the wind changed direction and the church was saved.

St. Olave’s was badly damaged in World War II. Many windows were lost in the 1940 bombing, and the rest of the church took a major hit one year later. Ernest Glanfield, the architect in charge of the 1951 reconstruction, found that enough of the foundations remained and its medieval layout could be restored. The present building is a combination of this reconstruction and the surviving medieval elements.

The crypt, with its western wall dating to 1270, is the earliest surviving medieval section. It is unknown if its ceiling, with a ribbed cross vault of Caen stone, dates from the same period. When the practice of crypt burial was discontinued in 1853, the crypt was filled in. However, it was cleared in 1935 and made into a chapel still used today. Other medieval elements include the doorway to the vestry, dated to the fifteenth century. Its stout oak door is said to be original, and the doorway with quatrefoils in the spandrels still stands. The partly-restored pillars and arches of the north and south arcades, moulded on quatrefoil piers of Purbeck limestone, also date to the fifteenth century. The lower stone base of the tower and the lower sections of the north wall also date to the same era. St. Olave Hart Street Church’s architectural features – the panel tracery, linearity of mullions, and quatrefoils in the spandrels – are of a perpendicular gothic style.

The church played a central role in the religious and social lives of Londoners in the Middle Ages. Serving as a place of worship, a community center, and an example of surviving medieval construction, St. Olave’s has helped shape Southwark into the area it is today. Its location near London Bridge drew members of the Church of England from both sides of the Thames. Church registers preserved from 1563 describe baptisms, marriages, and burials. Particularly noteworthy is the burial record of Samuel Pepys, the famous English diarist, who was buried ‘under ye communion table’ in 1703 alongside his wife, Elizabeth. The oddest burial record is that of Mother Goose, who died in 1586. The church was also home to many celebrations, such as the thanksgiving feast held by Princess Elizabeth – later Queen Elizabeth I – upon her release from the Tower in 1554.

In the seventeenth century, St. Olave’s became connected with the Navy Office on Seething Lane. The office’s location near the Tower and the Thames, combined with its proximity to St. Olave’s, suggests the interwoven nature of religion, military, and government at the time. 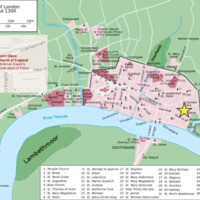 St. Olave Hart Street is located on the corner of Hart Street and Seething Lane (in close proximity to the Tower of London on the map). It is the Ward Church of the Tower Ward in the City of London. It was an eastern suburb of London in the middle ages, but is now a part of central London. 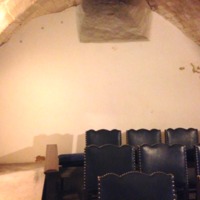 Of the remaining medieval elements in St. Olave Hart Street Church, the western wall of the crypt is one of the oldest, dating to c. 1270. In 1853, the crypt was filled in when the practice of crypt burial was discontinued by law. However, it was restored in 1953 (keeping the original western wall) and made into a chapel that is still used today for special occasions.