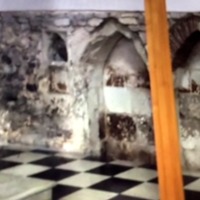 The stone wall shown here was apart of the original medieval construction of St. Giles' Cripplegate. Dating back to the fourteenth century, this wall is considered to be a part of the last medieval remains of the original parish. This part of the chancel was constructed during the reign of Richard II. Today, this medieval stone wall is visible to churchgoers and visitors of the London parish.

St. Giles’ Cripplegate is a London church on Fore Street, the central structure of the Barbican Estate, just a few blocks from the Museum of London. Constructed in 1090, the parish received its name from its dedication to the patron saint of blacksmiths and cripples, St. Giles. There has been debate about the word “Cripplegate,” whether it was derived from the Anglo-Saxon word “cruplegate,” meaning a covered way or tunnel. The church’s eleventh-century purpose was to serve as a parish for the Saxons in close proximity to the gate, Cripplegate. Over the centuries, St. Giles underwent constant renovations.

St. Giles, which stood outside Cripplegate, ran through the wall of London’s old city. The wall was the work of the Romans, to serve as a fortification to protect the Roman city. In fact, part of the wall is still visible. The side of the wall still standing is visible from the south side of the church. Like many parishes in London, the church underwent great damage in 1666 because of the Great Fire, and then later in the twentieth century during the World War II bombings, specifically the German Blitz.

Originally, in the eleventh century, this site belonged to the Saxons, though by 1090 it was replaced by a Norman church, which is the church that stands today. In 1090, it was the Bishop of London, Alfune, who was responsible for the construction of this parish church. As time went on, the parish grew in numbers. This rapid growth led to the next renovation in the architecture of St. Giles—the Perpendicular Gothic additions. This renovation occurred under the reign of Richard II around 1394, in which year the tower of the church was added. At this time, St. Giles maintained the original structure at the bottom of the tower. The tower was built along a garden, but because of urbanization over time, modern-day buildings and homes now surround the medieval parish. It was not until the late medieval period that the tower assumed its function as a residential space. Towers along the parish mainly served as a dwelling space. This type of housing was available more often than not for hermits, who played a large role in the rapid growth of the church.

Although the church had undergone many restorations due to the Great Fire and World War II, there remains medieval aspects which are present in today’s version of the church.  There is archeological evidence which supports this assertion, such as documents and present church remains, which help us to analyze the church’s original medieval appearance.

According to London: The City Churches, St. Giles had a clerestory, allowing little to no division between the chancel and the nave. A late-fourteenth century tower is at the west end of the church, and there was the addition of guild chapels in 1390. In the sixteenth century, St. Giles suffered a damaging fire, which led to another renovation of the church. From archeological evidence, it is clear that the sixteenth-century renovation did not follow the plan and layout of the fourteenth-century church, as the layout of the tower was off axis. There still remains, however, a part of the fourteenth-century church, such as the base of the tower and the front, lower walls of the Chancel. These remains consist of materials made of kentish ragstone, limestone, portland stone, and brick.

Today, St. Giles continues to serve as a parish church, holding mass, conducting christenings, weddings, funerals and other special services.  Even though it is submerged in modern-day urbanization, this historic building displays architecture ranging from the medieval to modern periods. 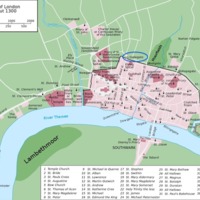 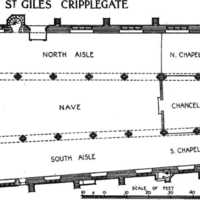 This sketch illustrates the layout of St. Giles' Cripplegate from 1400 to modern day. Parts of the church, and their centuries of construction, are presented above. With an aerial perspective, additions to the church over time are visible.