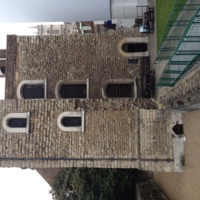 Jewel Tower stands today behind Westminster Abbey and represents one of the few lasting remnants of Westminster Palace. It is a three-storied, L-shaped structure constructed under the auspices of King Edward III in 1365, and completed under Henry Yevele’s management, a master mason, and Hugh Herland, a master carpenter, in 1366. Materials were transported to Westminster from elsewhere in England and continental Europe. Kentish Ragstone arrived from Maidstone, Reigate Beer brought from Devon, Caen from France, and Timber from Surrey. With construction finished, a moat was dug around the tower for added protection, with water being supplied from the Thames (which also offered a supply of fish to the palace). The vast majority of what visitors see today when they go to Jewel Tower is from its original construction. The building itself remains relatively untouched. Alterations have been made to replace stairs and improve doorways in the early seventeenth century and again in 1718-19.

The tower is now one of the few remaining standing forms of the medieval English Gothic style. It was originally a part of a much larger structure: the palace of Westminster. The uses of the Jewel Tower vary throughout the medieval era. It was first a part of the Privy Palace. The Privy Palace housed the private apartments for the members of the royal family. As the Jewel Tower was attached to the royal residence, it held items of great value. The tower first contained precious jewels as well as a great deal of silver plate, hence the tower’s name. The tower essentially functioned as a “private treasury” for the crown. Later in the fifteenth century, the Jewel Tower maintained its function as a storage site for valuables, which also included valuable documents and papers.

It is unlikely that Jewel Tower represented anything of importance to the common people who lived in or visited medieval London as it was a part of a larger palace and unlikely to be distinguished from street level. Upon its completion, the Jewel Tower had a great deal of significance to the royal family and those who lived and worked within the walls of the palace of Westminster. The Jewel Tower would have been a place of the upmost security and safety for the royal family’s most prized possessions. To everyone else at Westminster Palace, the Jewel Tower was a part of the Privy Palace, a separate and private residence where few could enter without royal permission. 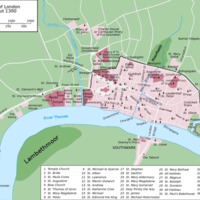 The Palace of Westminster can be seen in the lower left corner of this map. The Jewel Tower's location is marked with a red star.