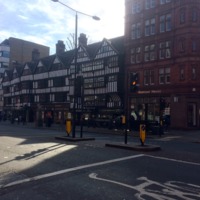 Some inns during the Middle Ages were used to accommodate travellers and traders while others were educational institutions for lawyers. The Staple Inn in London, originally known as le Stapledhalle, meaning “pillared hall,”was used for both during this time. The Staple Inn was established in 1378 as a wool staple, which is where the Inn received its name. A wool staple was essentially a trade center for wool merchants. The merchants stayed at the Staple Inn and their wool inventory were weighed and taxed there. The Inn was spacious and had many rooms available for the merchants. Stables were also available for horses and carriages.

The Staple Inn itself is located on the south side of High Holborn Street, WC1 and is a Tudor-style building. Today, the Staple Inn consists of two buildings that can be seen on the facade, one being the original building (the five bays on the left) and the second is a house around the same age as the original Inn (the two bays to the right). The difference in the two buildings is distinctly noticeable. The building was originally constructed out of timber and bricks. The style of the Inn is half-timbered, which means that the frame of the building is visible from the outside. This style of half-timbering was mainly there as a form of decoration, not as a form of stability. Another architectural feature seen in Staple Inn is its purely decorative close studding. Close studding is a technique used in timber-framed buildings where the individual, vertical timbers are set closely together. There are also numerous jetties along the face of the building that today hang over the modern day shops underneath the Inn. The Staple Inn also has a sloping roof and half walls in the garret (attic), both of which can be seen from the street view of the Inn. This allowed for more headroom and better lighting in the garret. The Staple Inn survived the great fire, but was repaired after damage that was done during the Second World War.

The Staple Inn was one of the most important buildings in London during the Middle Ages. It represents the significance of the legal profession, as barristers learned and were trained at the Staple Inn. Most people needed barristers at some point in their lives and they were an essential part of medieval London society. Even as wool staple, the Staple Inn represented a center of trade and prosperity in England. 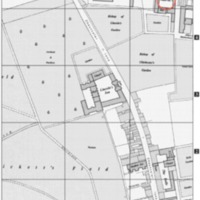 The Staple Inn is located in the top right-hand corner of this map, circled in red. 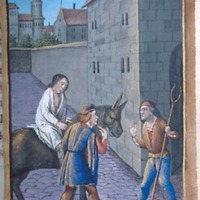 This particular scene depicts a good samaritan leading an injured traveler to the door of an inn, with the innkeeper seen on the right. Although this is not the Staple Inn, it represents an inn used for housing travelers. This was the primary function of the Staple Inn before the property was leased to the Inns of Court around the year 1400.