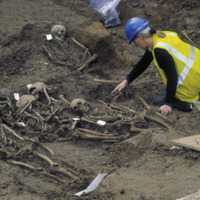 An archaeologist and bodies uncovered at the dig site of St Mary Spital cemetery, which was conducted by The Museum of London from 1998 to 2001. 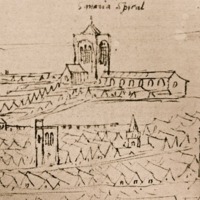 The view of St Mary Spital from Wyngaerde's "Panorama of London in 1543."

The grounds of St Mary Spital are located on what were then the fringes of medieval London in an area referred to as The spitel Fyeld on the Civitas Londinium, or Agas, map, now known as Spitalfields. Walter Brutus, a wealthy merchant and a citizen of London, and his wife Roisia originally founded an Augustinian priory and infirmary in 1197. The land upon which this priory and infirmary were situated was originally a Roman cemetery on the east side of Bishopsgate Street, near the City bars, and the land was given to Brutus and his wife by the Alderman Walter, son of Eilred, for the purpose of founding the priory and infirmary. The co-founders of the priory are thought to be Walter Fitz Eilred, William de Elie, John Bloundie, and Wymarke de Elbegate, all of whom were wealthy merchants in London. Walter, archdeacon of London, laid the foundation stone of St Mary Spital in June of 1197 and William de Ste. Mère l’Eglise, Bishop of London from 1199 to 1221, was responsible for the dedication. The site was later refounded in 1235 when Walter Brutus and Roisia rebuilt and expanded the church.

The most significant part of the site was the infirmary. The infirmary at St Mary Spital was the largest infirmary in medieval London, with a total of 180 beds. The infirmary, which was run by the twelve lay brothers and lay sisters under the supervision of a prior, was responsible for tending to pilgrims, the sick, pregnant women, and orphans (particularly children whose mothers had died during childbirth) until they reached the age of seven. It is also well-documented that royal servants, like Edward III’s yeomen, as well as wealthy benefactors of the priory and infirmary, were also cared for at St Mary Spital.

The use of the site for burials date back as early as 1150, prior to the establishment of the infirmary. While the majority of burials post-1250 (the dating having been determined both by relative stratigraphy and radiocarbon dating) are of patients who died at the infirmary, others are monastic burials of the canons regular and lay brothers and sisters. The types of burials in the cemetery range from single inhumations to mass burial pits. Two types of multiple burials were also found within the cemetery: inhumations of two to seven bodies stacked in a horizontal layer and inhumations of two to eleven bodies stacked on top of each other. The reasons for these types of multiple burials are often attributed to the multiple deaths that inevitably occurred within a large infirmary; often, patients died on the same day, or within two days of each other, which resulted in the types of burials that required the bodies being stacked in such a manner.

Single burials are typically found closer to the chapel and the priory. Popular opinion is that these burials are of royal servants, like Edward III’s yeomen, and St Mary Spital’s wealthy benefactors, who were treated in the infirmary or wanted to be buried on the grounds. There were at least twenty-five single inhumations within the priory itself, two of which are thought to have uncovered the remains of Walter Brutus and his wife. It is also likely that the canons regular, lay brothers, and lay sisters constituted a large portion of these single inhumations.

The mass burial pits account for some 4,000 bodies. These burial pits, located on the periphery of the site, are multilayered and contain anywhere between eight and forty-five bodies. These mass burial pits predate the Black Death and likely coincide with periods of increased mortality. There is evidence that the deceased who were buried in this mass grave were not carelessly disposed of but had received dignified burials. The bodies found within the pits are often in a supine extended position, arranged horizontally with a layer of soil between them, with a row of bodies above them, demonstrating a high respect and care for the deceased even during times of high mortality rates. These burial pits date somewhere between the early- to mid-thirteenth century, which makes it likely that these mass burials were a result of the famines of 1252 and 1257-58. 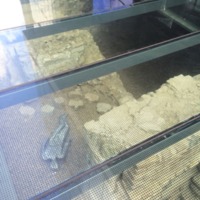 The charnal house, built in 1320, is the remaining portion of the cemetery of St Mary Spital Hospital and Priory. This charnal house is where bones that were disturbed during the digging of graves in the cemetery were stored. (Click on picture for more information). 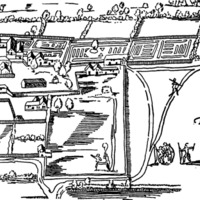