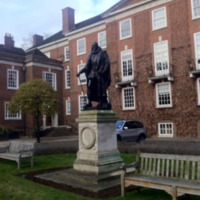 Gray’s Inn is one of the four Inns of Court in modern England, through which barristers and judges can become certified. It is located in the district of Holborn. Gray’s Inn does not have an established founding date as an organization because of insufficient written evidence. The use of the location as an important place of business for barristers, solicitors, and judges is believed to date back to the late fourteenth century and continues today. According to the website of the Inn, the area was most likely established as a legal district by royal decree when Henry III proclaimed in 1234 “that no body providing legal education should be located in the City of London.” This decree encouraged legal practitioners to peddle their trade to a location outside the city but as close as possible to the courts in Westminster.

Gray’s Inn takes its name from Baron Grey of Wilton (dates?) whose family originally owned the property, called Portpoole Manor at the time, which is where Gray’s Inn is now located. There is evidence that Portpoole Manor, the oldest known building on the site, was used as a place for lodging lawyers. Today Gray’s Inn is still used primarily as a place of residence for its members.

From what can be deduced from internal records of the Inn, there were several types of members during the medieval period that are similar to the stratified system which existed in guilds at the same time. The lowest strata of members were students who had not been “called to the bar” and were therefore not allowed to practice law yet. Above them were the “Utter Barristers,” who were allowed to practice law but had not finished their studies.  The third highest stratum belonged to the “Ancients,” who held a position of considerable prestige at the Inn, and who were allowed to practice law. The Ancients were only subordinate to the Readers, because they did not assist in the education of future barristers at the inn. Readers also played an important part in the main governing body of Gray’s Inn, called the “Pension.” Although these particular types of members dominated the internal structure of Gray’s Inn for the majority of the medieval period, a new type of member emerged at the end of the sixteenth century: the Bencher. Benchers were scarce during the medieval period but they later went on to dominate the Pension’s governing body in the centuries that followed.

Towards the end of the 1590s, Gray’s Inn developed a badge, which was visibly quite similar to a crest or coat of arms. Despite that fact Gray’s Inn insists it be called a badge. It consists of a gold griffin on a black background surrounded by the Latin words: Integra Lex Aequi Custos Rectique Magistra Non Habet Affectus Sed Causas Gubernat, which  translates to “impartial justice, guardian of equity, mistress of law, without fear or favor rules men’s causes aright.” The exact motivation behind the badge is unclear, however, the society of Gray’s Inn posits that the griffin is representative of the arms of a prominent member of the society (Richard Aungier) around the time of the badge’s institution. The reason behind the institution of the motto is also unrecorded but it seems similar to an oath that for the barrister profession. 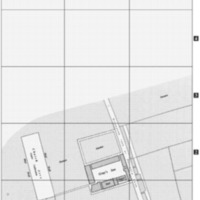 Located at 2 C2 on the 1520 map of London, Gray's Inn can be seen clearly in the district of Holborn.