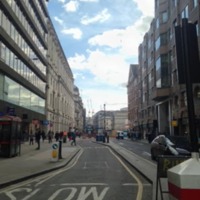 Moorgate, now a street and area of London, takes its name from one of the medieval gates of the city. The name originates from one of the seven gates that surrounded London during the medieval period. Moorgate was originally a postern, or secondary gate, until it was constructed into a true gate in 1415 under Thomas Falconer (lord mayor of London during that time). Of all of the seven gates, Moorgate is the one gate that does not have a name of Roman origin. It is of medieval origin. The word moor, or more, means “of marshy ground,” indicating the fact that Moorgate used to lead into Moorfields, which was a marshland north of the city wall.

Moorgate Street now runs from north at Finsbury down to Lothbury at the southern end. The street itself was constructed in 1846 in order to provide a new route to London Bridge. Moorgate was one of the last gates to be constructed, though it was considered to be one of the most grand and beautiful gates of the city. It was originally built for easier access to and from Moorfields. Unlike other gates, which seemed to be narrow and slightly inconvenient for passersby, Moorgate was spacious. In 1672, the gate was rebuilt to have a more imposing entrance. The gate was completely removed in 1761 to ease traffic.

The area around Moorgate was one of the last open spaces of the city. This open space, known as Moorfields, had many different uses. It was used for gatherings and gardening, as well as for skating in the winter when the marshes froze over. People would skate in Moorfields using skates crafted from animal bones. While the marshy field was drained in 1527, Londoners continued to use it as an open space for a variety of purposes, such as cloth-drying. Moorfields was the most common public space near Moorgate. It was also the site of a famous encounter. During the Peasants’ Revolt of 1381, the King met the rebels of the revolt to make promises at Moorfields.

There were a number of different buildings and areas around Moorgate and where Moorgate Street is today. A prominent building that was in Moorfields, north of Moorgate, during the seventeenth century was Bethlem Royal Hospital, although it is no longer there today. Also, the area of Moorfields during this time was used often for brick making for civic projects, such as repairing the London Wall. Moorfields was a prime spot for this work as it was an open area with lots of space for both firing and drying the bricks. It was also close enough to the center of the city for the transfer of these freshly manufactured to arrive at the City wall relatively quickly, through Moorgate. These brick-making sites, however, are not found on early maps of medieval London, suggesting that brick-making activities were likely set up temporarily in Moorfields.

Today, Moorgate Street is home to a great financial district. If one were to walk from Moorgate to London Bridge, it is about 1 mile, or 1.6 kilometers. Some current landmarks on and near the street include the Bank of England and London Metropolitan University. 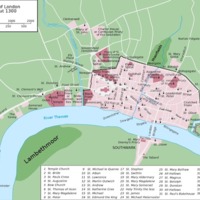 This is a map of London circa 1300. Moorgate can be seen north of the Thames, under Moorfields.