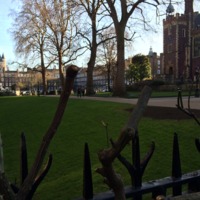 Lincoln’s Inn is London’s oldest of the four remaining Inns of Court. It was a fully functional institution by 1422, although it is likely that it existed several decades prior. The Inns of Court were developed as a result of King Edward I’s Order in Council, which was issued in 1292. Edward wrote to the Chief Justice of Common Pleas, requesting the establishment of an apprenticeship program that would allow for each county to have trained lawyers and attorneys. Those recruited for legal training eventually settled in various places, establishing their own collegiate communities.

There are several different theories as to how Lincoln’s Inn got its name. In 1350, an unofficial society of lawyers-in-training occupied a location called ‘Lycolnesynne’ under Thomas de Lincoln, and thus the name derives from his name. Then between 1412 and 1422, the group travelled to the current Lincoln’s Inn site, on Chancery Lane, on which part of the Old Hall still exists. One area of the site, Cottrell Garden, was the site of a former hospital for lepers founded by the Knights of St. John. A charity rented the land to Thomas de Lincoln’s group for nine shillings per annum, and thus Lincoln’s Inn secured the property. Another popular theory, however, involves Henry Lacy, the Earl of Lincoln, whose home was located on Chancery Lane. He was known to be a close friend of King Edward I. Thus, historians speculate that Edward’s legal initiatives inspired Henry Lacy’s fostering of what became Lincoln’s Inn on his property. Despite the various evidence that may point to a single origin, records that mention Lincoln’s Inn definitely only date back to 1422, so its official inception is most notably marked by the establishment of its permanent home on Chancery Lane in this same year.

Lincoln's Inn was a community of men in the legal profession, and within that community was a system of different positions members held within the organization, including treasurer, pensioner, marshal, collector of chapel money, auditors of accounts, and judges (benchers of the Inn). Many of the young men trained here gained enough experience to become the King’s serjeants as well. Since people could not easily access the King’s courts, establishing these Inns of Court made justice more accessible to them. The daily life of a member of the Inn involved attending lectures by masters, communal dinners, prayer services, and “moots,” during which members voiced their opinions and grievances. One important job that was established in 1422, and remains an important duty even in the present day, is that of bookkeeper. The bookkeepers helped record and maintain the ‘Black Books,’ which are a set of Lincoln’s Inn records that began in 1422 and continue to the present day.

Not only was Lincoln’s Inn a place of learning and training, but it was an environment for camaraderie. The social life of a member provided him with privileges and opportunities that he would not have otherwise experienced; having membership at the Inn fostered a brotherhood of sorts. An example of this bond among Lincoln’s Inn members is evident throughout the reign of Elizabeth I, after she instituted the Act of Supremacy and Act of Uniformity. The Queen’s officials desperately attempted to enforce laws against Catholics, but most of their attempts were futile against Lincoln’s Inn. In 1577, an investigation of suspected Catholics within Lincoln’s Inn was initiated. Even William Roper, a bencher who was ‘sequestered’ for not conforming to the Queen’s religion, did not actually experience a ban on his membership. Even when faced with threats from the Crown, solidarity, loyalty, and privilege were among the key features of being a member of Lincoln’s Inn.

Set on 11 acres, featuring a Gothic-style Chapel, buildings made of timber and wood, as well as an entry archway made of iron and brick, Lincoln’s Inn has maintained, to a great extent, the medieval façade of its various buildings and offices. The site features courts, gardens, and Lincoln’s Inn Field, as well. Currently Lincoln’s Inn remains an exclusive group of lawyers, attorneys, and those in the process of training in these professions. 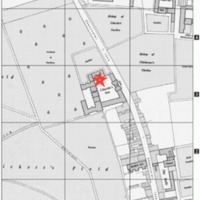 This is a picture of the opening brick archway of Lincoln's Inn.