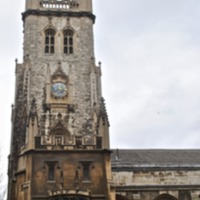 St. Sepulchre without Newgate is located near Old Bailey, and during the medieval period, this site was just outside of the Newgate entrance leading into London. The earliest church on this site was built in the 1100s, with additions during the later medieval period. It was given to the Priory of St. Bartholomew in 1137. This rebuilding occurred in the fifteenth century, and was sponsored by the Popham family. The family erected a chapel on the south side of the building, the porch of which can still be seen, and remains the main entrance to the church. This entrance extends from the south side of the tower and the western end of the church. St. Sepulchre without Newgate was one of the many churches subject to the Dissolution of the Monasteries in the sixteenth century. In 1610, James I granted the rectory to Francis Phillips, among others. They then purchased the parish, holding it in fee-farm from the Crown. During the Great Fire of London in 1666, much of the structure was destroyed; the tower, however, remained intact and can still be seen today. The tower is topped with weather vanes on each corner. The rebuilding of St. Sepulchre was supervised by Christopher Wren, and was completed in four years. Today, St. Sepuchre is home to the Royal School of Church Music, and hosts many concerts.

St. Sepulchre’s has been a popular church since its first construction. In the medieval period, several fraternities were established at St. Sepulchre’s for the maintenance of chantry priests. This shows just how important it was to medieval life in London, that people frequently used this parish church to have priests pray for their souls. Many important people from the medieval period were buried in St. Sepulchre’s as well, including Roger Ascham, Queen Elizabeth II’s Greek and Latin tutor. He was also a Latin secretary for King Edward VI and Queen Mary. Quite notably, one of St. Sepulchre’s vicars has an important role in history: Reverend John Rogers was the first martyr during Queen Mary’s reign, and was burned at the stake for his religious beliefs.

St. Sepulchre’s also has a significant role in the history of Newgate prison, as it was the nearest church to the prison. The clock was used to mark the time until executions. Frequently, the bellman of St. Sepulchre’s travelled under the gate to Newgate prison, ring a bell, and give advice to the prisoners to be executed. He told them to repent, and prayed for their souls. The next morning, when the cart taking the prisoner to his execution passed by St. Sepulchre’s, the bellman would once again appear, toll the bells, and pray for the criminal. While there, the prisoners that were taken to Tyburn for execution were given a nosegay. This practice is believed to have originated as a way to show sympathy for those who would soon be leaving the world and its beauty. 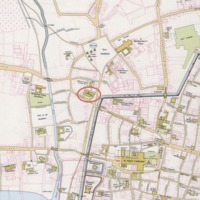 This is a map of the Newgate area around the year 1270. St. Sepulchre without Newgate church is circled in red.