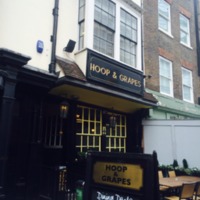 There is some dispute over the etymology and meaning of "Aldgate," but various historians have provided some theories. The earliest record of Aldgate has it listed as East Gate, which makes sense, given its location as the easternmost gate on the Wall.  Another interpretation of its current name, "Ale Gate," indicates that an ale-house may have been nearby, and yet another, "All Gate," may have pointed to that area's openness to all.  Even though the name Aldgate may point to a variety or origins, all of these etymologies do seem to corroborate Aldgate High Street's history of being a center for weary travelers to London, who may have stayed at an inn or have a pint of ale on this street. Most scholars seem to agree that the most likely meaning of "Aldgate," however, is "Old Gate," which gives us an indication Aldgate High Street's antiquity, and its long history dating back to Roman times.

Aldgate High Street's close proximity to Aldgate helped to cement it as a center for visitors. The street was once home to inns and taverns to accommodate the travelers coming in and out of London through Aldgate. As is the case with many other parts of London, there are few remnants of buildings or sites actually dating back to the medieval period.  The only buildings on Aldgate High Street that date to the period before the Great Fire are a series of buildings at the northern end of Aldgate High Street, one of which is a pub called Hoop & Grapes.  This pub is incredibly unique, as it was built in 1593 and was one of the only wooden buildings to survive the Great Fire of 1666.  Today, the front of the building looks much like it did in the Tudor period, possessing a few medieval characteristics such as the jetties on its second level and its characteristic Tudor, timber frame.  The cellar also supposedly dates back to the thirteenth century!

Although nothing remains of its medieval past, one would be remiss not to mention St. Botolph's without Aldgate, located on Aldgate High Street.  The site of the church has existed for over a thousand years, with its first, recorded Rector in 1108. The original Saxon building was enlarged in 1418 and almost entirely rebuilt in the sixteenth century. The church also houses monuments to figures who lived during the Middle Ages, such as Thomas, Lord Dacre, and Sir Nicholas Carrew of Beddington.  The church is located on the Western end of Aldgate High Street, and like most medieval churches, it had an incredibly important place in the lives of those who resided on or near Aldgate High Street. 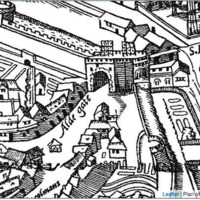 This map was produced in 1633, and it shows what London looked like in the 1560s. Aldgate High Street would have led from below the gate and through. 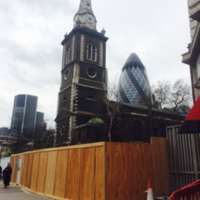 St. Botolph's without Aldgate dates all the way back to 1108; the building seen here dates from 1744, but there has been a church on this site since Norman times. The church is located at the Western end of Aldgate High Street.