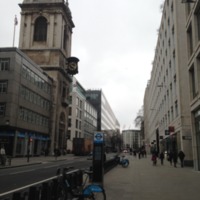 The street is lined with luxury clothing stores, commercial banks, food outlets, and even an eight-floor mall complex, complete with restaurants, cafes, and high-end retail stores. On the left  side of the picture is St. Mary-le-Bow church, which dates back to Saxon times, but was rebuilt during the eleventh century.

Cheapside, also referred to as West Cheap, was a street and market dating back to the late ninth century. It was one of two great markets that may have been established during Alfred's reign (871-899) as part of an urban restoration project. In her book on the mercantile community of medieval London, Pamela Nightingale describes early Cheapside's main function as "a market to sell the produce of St. Paul's rural estates." West Cheap, the larger of the two markets, was situated in the west of the medieval city, beginning at the Great Conduit at the base of Old Jewry Street and running westward to a smaller conduit northeast of Saint Paul's Cathedral. A few significant points along the strip (from east to west) included St. Mary-le-Bow church, the Cheapside Cross, and St. Peter’s Church. Cheapside—the word chepe indicating that it was a place for trading—was one of the largest areas of wealth in medieval London, as well as a significant point along a route of royal and civic processions through the city.

Along the street and side streets of Cheapside, shopkeepers and merchants traded their wares, often indicating their storefronts or stalls with signs designed to quickly attract attention from the public. Members of merchant and craft guilds set up shop in designated spots in Cheapside. While some men worked independently at their crafts in stalls set up in the market, craft guilds and more dominant merchant guilds began to largely control trade. The trading influence of some of the larger guilds can be seen in the names of the side streets surrounding Cheapside. Some of these streets included Iremonger Lane, Mylke Street, and Bread Street.

The space and large buildings that ushered hoards of medieval Londoners into this public city center defined Cheapside as one of the most important areas in London. The street's significance is also suggested by its inclusion in many processional routes throughout the city. Before it was demolished, Cheapside included one of twelve monuments erected by Edward I in memory of his wife and Queen, Eleanor of Castile. These "Eleanor Crosses" marked various points of her funeral procession throughout the city. Cheapside was often used in various royal processions including pre-coronation ceremonies and victory marches after battles abroad. Some of the processions even ended at some point along the street with staged performances at the Cheapside Cross or one of the conduits.

Today, Cheapside continues to draw public attention as a center for retail. The street is lined with luxury clothing stores, commercial banks, food outlets, and even an eight-storey mall complex, complete with restaurants, cafes, and high-end retail stores. While the street has drastically changed since the Middle Ages, the side streets branching off from the main road recall Cheapside's medieval past. As one walks along the once bustling trade center, you may see street signs for Poultry, Ironmonger Lane, Milk Street, Bread Street, and Wood Street (to name but just a few), reminiscent of the guilds and the various trades in medieval London. 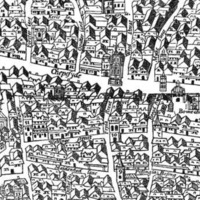 This map was published in 1633. It depicts London during the 1560s. West Cheap was situated in the west of the medieval city, beginning at the Great Conduit at the base of Old Jewry Street and running westward to a smaller conduit northeast of Saint Paul's Cathedral.