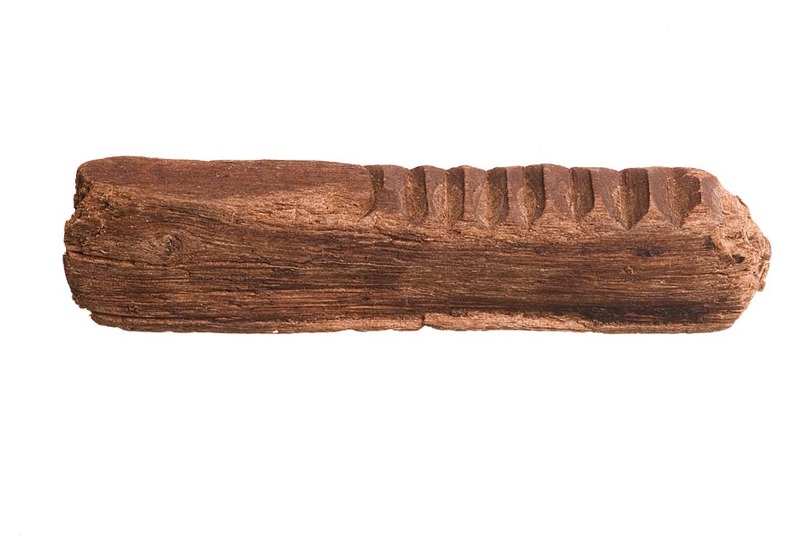 Tally sticks were commonly used in London during the middle ages as a convenient and accessible method for keeping records of loans or other payments. They were popularized during the reign of King Henry I [1] and used until the nineteenth century. [2]Tally sticks found in London were most commonly formed of willow wood as it was in cheap and abundant supply along the banks of the Thames. Willow also provided an extra measure of security, as willow wood had very clear and distinctive grain making it easy to ensure two halves of a tally sticks truly matched [3]. Notches of differing widths were cut into the side of the thin planks. Each notch represented a value of £1000, £100, £20, £1, 1 shilling, or 1 penny, with the thickest notch representing £1000 and the thinnest representing 1 penny. The payer’s name and date of the transaction were carved on both sides and the stick was split in half lengthwise [4], with one side, known as the “foil,” going to the debtor and the other, known as the “stock,” going to the creditor as proof of the transaction. When the payment was due, each side of the stick could be compared to ensure the payment was correct, effectively protecting both creditors and debtors from fraud.

This specific tally stick from the Museum of London dates to the late thirteenth century. It was found in a cesspit behind a row of homes on Milk Street that belonged to various Jewish inhabitants during the twelfth century. The amount denoted on the tally stick is £9, 4 shillings, and 3 pence, equivalent to about £4,250 in today’s currency. Unfortunately, this tally stick is broken so it is impossible to know if this was the true amount. The cesspit in which it was found was owned by Bonamicus, “Jew of York” at the time of its disposal. His neighbors were Master Moses, “Jew of London” and Cresseus son of Elias, “Jew of London.” Jews were often money lenders, so it is highly probable the tally stick belonged to one of them and was tossed after a debt had been repaid. However, there were many people living in the area at the time so it is impossible to say with certainty to whom this tally stick belonged.[5]

Jews first arrived in London in 1066 when Jewish moneylenders in Normandy were invited to settle in England by Duke William of Normandy, called William the Conqueror after he successfully invaded England. At the time, Christians were forbidden from taking interest, which prevented them from loaning money and other financial ventures. This, coupled with the fact that Jewish people were barred from owning land, helped push many Jews into the business of loaning money and banking. However, the Jewish association with money-lending also made them the target of anger by debtors. Resentment against the Jews also grew during the Crusades, which promoted ideas about Jews as the ‘killers of Christ.’ By the late thirteenth century, moreover, laws forbidding Christians from commercial dealings with money loosened, making Jewish moneylenders less crucial to the crown. These and other problems prompted king Edward I to withdraw royal support from the Jews, who were expelled from England in 1290. [6]

The tally stick played an essential role in collecting and accounting for royal revenues. The two elected Sheriffs of London were responsible for collecting taxes and fines in order to pay to the crown one half of London’s annual fee farm. Twice a year they accounted to the royal exchequer for the city’s revenues and expenditures by presenting tallies as a voucher for their own expenses as well as receiving a collective tally from the exchequer once they paid all the sums owed. [7]

Tally sticks were cumbersome and laborious to produce, so it is reasonable wonder why they were such a prolific form of record keeping and accounting for hundreds of years. The success of the tally stick is largely due to the fact that the majority of London’s population was illiterate. Regular receipts would have gone over the head of most of Londoners, and the tally stick proved to be a simple way to keep records that anyone could understand. In the earlier middle ages, even a majority of the Sheriffs were illiterate and had only the most rudimentary math skills. [8] By the later middle ages, many officials of the exchequer had acquired the reading and math skills necessary to abandon the tally stick, but it remained in use until it was decommissioned in the late eighteenth century. This is possibly because by this time the tally stick had become a venerable symbol of finance in England. The exchequer was an institution committed to continuity; for example, the rolls they created in the nineteenth century were exactly the same as the rolls they created in the twelfth. Perhaps the tally stick had taken on a life of its own as a revered practice and symbol in England, and the exchequer and Londoners alike were not ready to simply give it up. [9]

Due to the immense number of tallies that were produced and carefully saved as records, there should be multitudes of them left for archaeologists and historians to study. Unfortunately, this is not the case. In 1834, the British government felt it was no longer necessary to keep the thousands of tally sticks stored in the Houses of parliament. In order to dispose of them, they burned them all in a massive blaze that got out of control and destroyed the Palace of Westminster[10]. The fact that so many of these records were lost makes the survival of this tally stick all the more special. 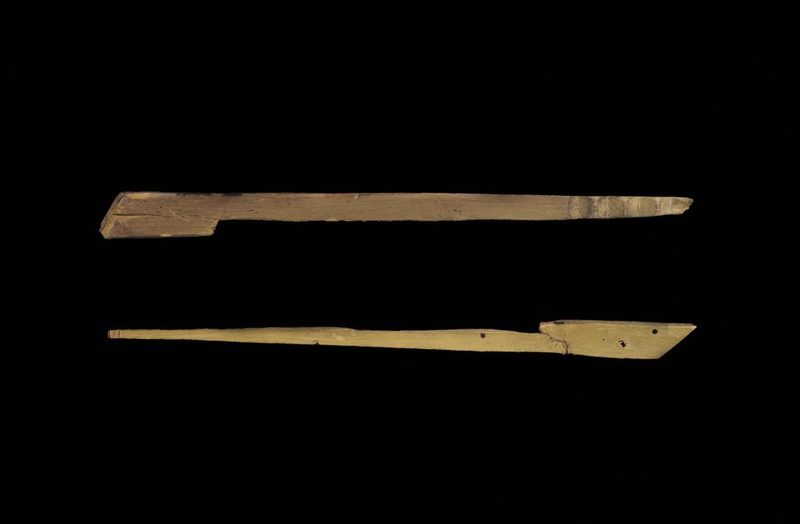 A set of tally sticks from the Jewish Museum in London. It notes a payment of one shilling by Isaac the Butcher relating to the 1241 tax of Gloucester Jews. 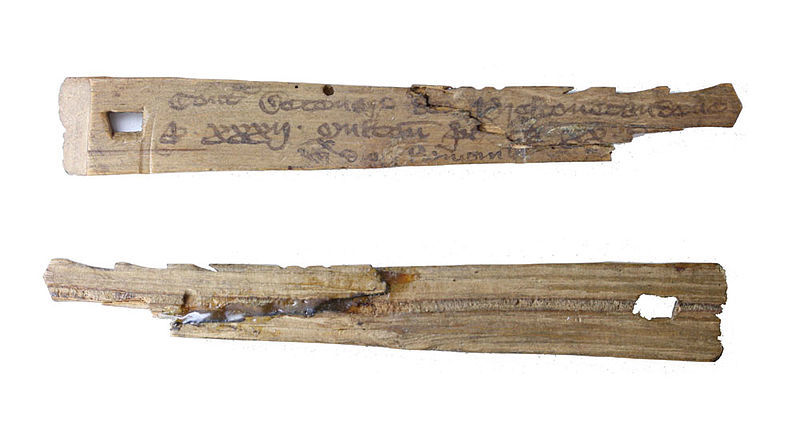 The front and back view of a tally stick recording a debt of 32 sheep for two pounds thirteen shillings and four pence owed to the rural dean of Preston Candover.

A collection of 13th century tally sticks. One is issued to William Hainton for the farm of two parcels of land in Cambridgeshire. Another is issued to Nicholas de Turevill, a sheriff of the counties of Buckinghamshire and Bedfordshire between 1293 and 1296, to clear outstanding debts to the king.

Rudolph, Robert, "A Short History of Tallies," in Studies in the History of Accounting, ed., A. C. Littleton and B. S. Yamey (London: Sweet and Maxwell, 1956), pp. 90-98 https://www.gwern.net/docs/bitcoin/1956-littleton-studiesinthehistoryofaccounting.pdf