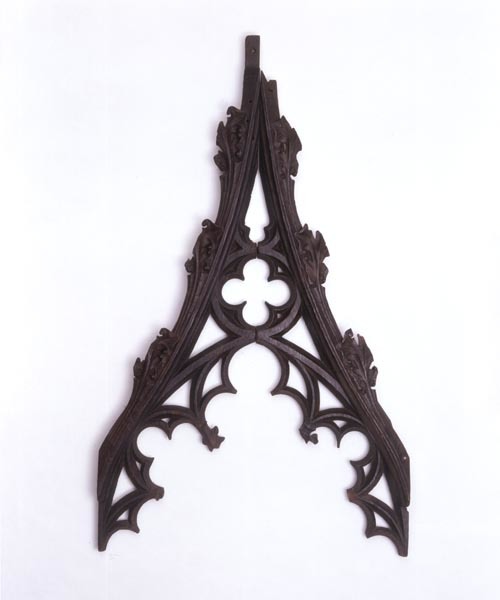 Choir stalls are decorated wooden seats located in the choir, a part of a church between the larger nave where church-goers sit and the sanctuary, where the altar is located. Choir stalls are used by clergy during liturgical services when they sit, stand, kneel, pray, and sing. Above some choir stalls in medieval churches were canopy arches, which decorated the choir stalls and were made of carved oak. A surviving canopy arch from a choir stall is on loan in the Museum of London and gives a glimpse at what this type of medieval religious architecture looked like.

This wooden canopy arch on loan in the Museum of London dates back to the fourteenth century (ca. 1365). Made by wood carvers, the canopy arch is waxed dark brown in color, standing 108 cm in height and 66 cm in width. The canopy arch is shaped in a pointed arch and decorated with Gothic-style designs, including crockets on the arch, which are small carved designs of leaves or buds placed on the sides of not only small carved pinnacle arches such as this, but also on spires and gables. The interior of the arch has geometrical tracery with foliated cusps. These features, especially the tracery and foliage designs, were key components of Gothic-style wood carving in the late medieval period.

Medieval choir stalls were usually commissioned by religious authorities wealthy enough to pay for this architectural decoration. Wood carving was widely practiced, and those who worked in the field were highly valued in Europe due to their expertise in using knives and chisels to make complex, decorative objects. Wood carvers produced much of the furniture found in medieval churches, particularly the celebrant’s seat, episcopal thrones, doors, pulpits, reading-desks, statues of saints, and crucifixes. The works of wood carvers in the late medieval period have mostly not survived due to decay, fungus, and fire, making this surviving canopy arch stand out.

This canopy arch is believed to have been from the church inside the Royal Hospital and Collegiate Church of St. Katharine’s by the Tower, simply known as St. Katharine’s by the Tower due to its immediate proximity to the Tower of London. The Royal Hospital of St. Katharine was founded by Queen Matilda in the twelfth century and was patronized by later queens. By the late 1300s, St. Katharine’s, run by Augustinian canons, had become one of the largest, wealthiest and most important religious institutions in medieval London. It received a royal charter and grants from the royal family, which established the hospital as an important charitable institution in London.

St. Katharine’s by the Tower consisted of both a hospital and a church. The hospital was founded to support members of the royal family and thirteen selected poor people, which included a Master, three priests called “brethren”, and three nuns called “sisters.” The other six were inmates who were cared for in the hospital. In the late thirteenth century, the hospital grew to twenty-four poor persons staffed by a Master, brethren, and sisters. The brethren provided spiritual care of the people in the hospital, whereas it was the sisters’ job to provide physical and medical care. However, the hospital was less like a modern hospital for the sick and more like a nursing home for the old and poor. The church and hospital concentrated on becoming a charitable institution in the wider community, since by the thirteenth century the royal foundation of St. Katharine’s had begun distributing alms to poor people outside the hospital.

The church was founded to celebrate daily Mass for those in the hospital and the royal family, becoming a fixture in the everyday lives of those associated with St. Katharine’s. The church, along with the hospital, was renovated in the fourteenth century under the direction of Queen Philippa. Part of the renovations included adding choir stalls in the church for the master, brethren, and sisters. In all, twenty-four choir stalls were placed inside the church and remained there for the duration of the church’s existence. Probably because of its association with the royal family, St. Katharine’s survived the dissolution of the monasteries in the sixteenth century, as England transitioned into Protestantism under Henry VIII. St. Katharine’s began to celebrate Mass in English and the brethren were allowed to marry. An attempt to re-introduce the Mass in Latin under Mary I was opposed by many in the hospital. Masses were conducted in English through the church’s final days, with the last Mass being held on October 29, 1825.

"History of the Foundation." The Royal Foundation of St. Katharine. https://rfsk.org.uk/history/. Accessed 15 November 2019.

Tracy, Charles. “The Choir Furniture of St Katherine's-by-the-Tower and Its Position in the Stylistic Development of English Choir-Stalls during the Second Half of the Fourteenth Century.” Archaeological Journal. 143 (1986): 322-39. 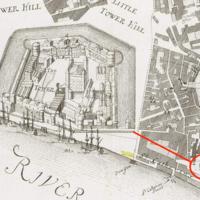 This map shows t. Katharine’s by the Tower and the liberty of St Katherine's, located close to the Tower of London. The site was eventually redeveloped into St. Katharine’s Docks in the nineteenth Century. Map from John Strype, A Survey of the Cities of London and Westminster (London, 1720). 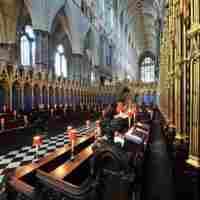 This set of choir stalls are located in Westminster Abbey in London. The canopy arches can be seen in gold. Clergymen and members of the choir are occupying these stalls during services. 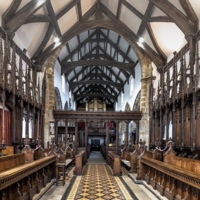